I received a free copy of In the Blue Hour from TLC Book Tours for my honest review. 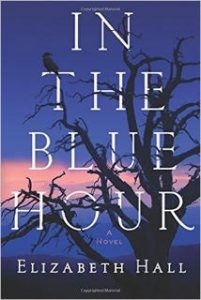 Elise Brooks dreams of a car accident on an icy road. Weeks later, her beloved husband, Michael, is killed in just such a crash. Now, overcome with grief and uncertainty, Elise believes his spirit may be following her in the form of a raven, trying to tell her something from beyond the grave.

Desperate to understand the signs, Elise embraces both the Native American wisdom she grew up with and the world of psychics and seers. So when a tarot-card reader suggests she take a journey to the mysterious address found in Michael’s old jacket, she embarks on a cross-country trek to follow the clues.

Accompanied by Tom Dugan, an engineer and scientist who does not believe in psychics, mediums, or the hoodoo “conjure woman” they encounter on the road, Elise navigates the rituals and omens of the spirit world in an attempt to unravel the mystery of her husband’s message.

Elizabeth Hall, author of Miramont’s Ghost, has worked as a teacher, communications consultant, and radio host. She spent many years in the mountains of Colorado and now resides in the Pacific Northwest, where she indulges in the fiber arts of knitting, beading, and weaving.

This was a very mystical book full of Native American lore, psychic experiences and dreams.

Elise loses her husband of many years and she is barely existing. As she starts to notice the world around her again she begins to wonder if her late husband is trying to send her a message from the other side. As she further explores the possibility with his Native American family and with the help of new friend who knows more than a stranger should. As Elise opens her mind more and more to the signs around her she goes on a journey to try and find the answers she seeks.

I really enjoyed this book as I do have a fascination with Native culture. The stories told were interesting to me. Elise was an interesting character with a fascinating story once it was all told. Her journey proved to be one of learning and discovery, not to mention answers for her. She did not know much of her childhood as her parents died when she was relatively young so it was good to see her find out who she was.

The ancillary characters were well drawn and quite diverse and each added their own special spark to the story. The plot moved right along once Elise shook herself up and got moving along on her journey and my biggest complaint was that the answers were all given in the last two pages and then the book was done. An epilogue might have been nice. Other than that I did find the book to be a very engaging read.

One lucky reader (US/Can) will win a copy of In the Blue Hour. Just enter as many ways as you would like on the Gleam widget below. Full rules are on the widget. Good luck everyone.

In the Blue Hour