Book Review and #Giveaway: The Girl Who Disappeared Twice by Andrea Kane 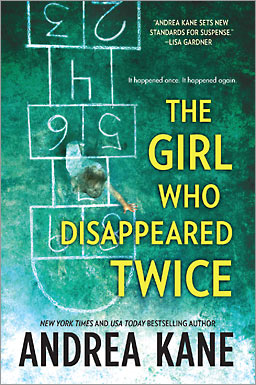 
She couldn’t stop it. Not then. Not now.

If she’d only turned her head, she would have seen the car containing her daughter, struggling to get out. Struggling to escape her kidnapper.

Despite all her years determining the fates of families, veteran family court judge Hope Willis couldn’t save her own. Now she’s frantically grasping at any hope for Krissy’s rescue. Her husband dead-set against it, she calls Casey Woods and her team of renegade investigators, Forensic Instincts.

A behaviorist. A techno-wizard. An intuitive. A former Navy SEAL. Unconventional operatives. All with unique talents and personal reasons for being part of Casey’s group, they’ll do whatever it takes.

Able to accurately read people after the briefest of encounters, Casey leads her crew to Krissy’s home. There, she picks up the signs of a nervous spouse, a guilty conscience, a nanny that hides on her cell. She watches as secrets beg to creep into the open.

Forensic Instincts will dig through each tiny clue and eliminate the clutter. But time is running out, and even working around the clock, the authorities are bound by the legal system. Not so Casey’s team. For they know that the difference between Krissy coming back alive and disappearing forever could be as small as a suspect’s rapid breathing, or as deep as Hope’s dark family history.


Andrea Kane’s groundbreaking romantic thriller, Run for Your Life, became an instant New York Times bestseller, paving the way for a series of smash hits. Her most recent triumphs, Twisted and Drawn in Blood, featured the dynamic FBI team of Special Agents Sloane Burbank and Derek Parker. The Girl Who Disappeared Twice introduces Forensic Instincts, an eclectic team of maverick investigators. Despite their differences, they have one common bond—a blatant disregard for authority. Armed with skills and talents honed by years in the FBI and Special Forces, and with training in behavioral and forensic psychology, Forensic Instincts solves seemingly impossible cases while walking a fine line between assisting and enraging law enforcement. With a worldwide following and novels published in over twenty languages, Kane is also the author of fourteen historical romances. She lives in New Jersey with her family, where she is plotting new ways for Forensic Instincts to challenge the status quo.


This book starts with the introduction of the Forensics Instincts team at work. They are a group of investigators with serious skillz as it is said but who sometimes work outside of the law. They do, however, succeed and succeed well at their job. They have just finished bringing down a murdering/rapist when they get the call from a very distraught mother that her daughter has been kidnapped.


This not an ordinary kidnapping though. The mother is a family court judge, the father a criminal defense attorney. In addition, the mother Judge Hope Willis is a twin and her sister had been kidnapped when she was a child. It’s like the return of a horrible nightmare.


Forensics Instincts, the local police and the FBI come together to try and discover who kidnapped little Krissy. Will they be able to find out in time?


I enjoyed the characters in this book. The team at Forensics Instincts are fun, quirky and very good at what they do. Almost too good. As the book progresses each member uses their skill set to work with the others to figure out who has kidnapped the child. They remain one step ahead of law enforcement due to some stretching of the rules but as they remind everyone that is why they are hired.


The book follows the team as they work with the FBI and alone to track down leads both good and bad. You see the effort it takes to sort through all the bits and pieces of information that comes to light in an investigation like this. Nothing can be ignored as it could lead to the kidnappers.


For a suspense/thriller the book did lag in places and I was sorry for that. When I read a book like this I want to feel like I can’t put it down. The overall story was entertaining, I just think it took a little long to get there. I would read another book with these characters though – I am not ready to give up on their adventures. There are new members to the team for the next book and I think that the interpersonal relationships will be interesting.


The Girl Who Disappeared Twice is available at Amazon.com


Be sure to come back on Monday when I will have an interview with the author of the book, Andrea Kane!


I have one copy of The Girl Who Disappeared Twice for a lucky reader.
How do you win?
Just jump on the Rafflecopter!

Disclosure: I received a copy of The Girl Who Disappeared Twice gratis. Any opinions expressed are my honest opinions and were not impacted by my receipt of the free book. I received no monetary compensation for this post.