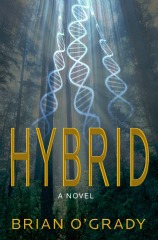 Seven years ago, everyone died in the Honduran camp from the EDH1 virus, but Red Cross worker Amanda Flynn. Airlifted home to America, medical professionals tried to identify why Amanda survived when others died gruesome, agonizing deaths or became violent savages. Little did they know that anyone who survived…changed.
Since her escape from quarantine, Amanda has been in hiding slowly realizing the powers that could have only come from her infection. She can sense things, do things using her mind, things that are incredible and sometimes incredibly dark. But as she resists the pull toward violence, a new survivor has entered her consciousness – one without her willpower to block evil impulses. One who revels in bloodlust and seeks to expand his mastery by forcing the end of human society. And he’s coming for Amanda.
A sharply written and engaging cast of characters adds to the fever excitement and suspense – Dr. Phil Rucker, the coroner whose Asperger’s syndrome comes complete with its own demons; Father John Oliver, the kindly priest whose faith is brutally tested; Rodney Patton, the homicide chief who sees what others miss; and Greg Flynn, Amanda’s father-in-law and the man whose moral center guides others in the storm.
About the Author:
Brian O’Grady (www.brianjogrady.com) follows in the tradition of Michael Crichton as a physician who brings his in-depth medical knowledge to his craft. A practicing neurosurgeon, O’Grady is a graduate of the University of New Mexico who completed his residency in neurosurgery at the Mayo Clinic. His deep insight into the mysterious workings of the human brain brings HYBRID realistically to life.
My Opinion:
Oooooh, wild and crazy book. Very thought provoking. Scary.
Biological warfare is one of the concerns that is always buzzing below the surface in the world in which we live. This book explores the effects of releasing a virus into the population. But this is not just any virus – in the people that survive it special powers develop. It’s how those people learn and develop that create the core story.
As always there is a battle of good against evil – in this case the evil is supplied by a rather undefined Islamic (?) terrorist group. Or was it a group of billionaires? Or were the billionaires manipulating the terrorists? To me this was the most confusing part of the book; I was not really sure but it almost didn’t seem to matter since there was a completely evil individual to carry the bulk of the story. He played nicely against the conflicted heroine, Amanda. She was as affected by the virus but her better instincts ruled her life so she learned to control her new manifestation and move forward in a mostly positive way.
There are other characters, well developed that help in the battle against the virus. There is also a rather odd naval battle with Iran that I just didn’t understand – it seemed unnecessary to the plot and tossed in for some kind of bizarre topical side event. Despite that odd departure from the main story line I really did enjoy the book. It was hard to put down and in fact I found myself reading the last chapter into the early morning hours.  The ending is satisfying but does leave the door open, if you ask me, for more stories about the infected ones.
If you are looking for a thrilling suspense tale, this one will satisfy despite a few odd jogs here and there.
Hybrid is available at Amazon.com
Disclosure:  I received a gratis copy of Hybrid. Any opinions expressed are my honest opinions and were not impacted by my receipt of the free book. I received no monetary compensation for this post.
Share
Tweet
Pin
Share
Email
Book ReviewBookTrib

Book Review and #Giveaway: Song of the Silk Road by Mingmei Yip

About the Book: As a girl growing up in Hong Kong, Lily Lin was captivated by photographs of the desert—its long, lonely vistas and shifting sand dunes. Now living in New York, Lily is struggling to finish her graduate degree when she receives an astonishing […]