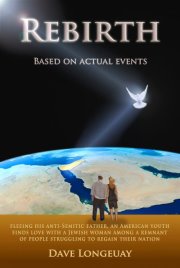 
How did a remnant of scattered Jews rise to build a mighty superpower in the Middle East? Fleeing his father’s anti-Semitic organization, Charles Devonshire journeys into the most volatile landgrab in history—Post WWII Palestine. Charles pursues a beautiful but mysterious librarian, Gladia, who introduces him to the elaborate Jewish underground. While joining their plight to reestablish a homeland, he falls in love with her and faces painful challenges in developing a relationship within their culture gap. And in the midst of battling the hostile inhabitants who also laid claim to Palestine, he searches for clues of his own troubled past. Can Charles pursue love, uncover his family secrets and avoid being trapped in the middle of the world’s longest feud? Rebirth draws you into 1948, into a world of intrigue, espionage and anti-Semitism. Witness how ancient prophecies were fulfilled against impossible odds as Israel built a nation and defied skeptics. Journey through the precarious events that led to Israel’s miraculous rebirth on May 14, 1948. Experience the unrelenting pursuits of the most persecuted race, and how their renewed strength reestablished their original language, customs and land cultivations after 2,000 years of desolation—an accomplishment no other nation can claim.


Dave Longeuay has been writing since 1978. His works have ranged from stories and poems to songs and video documentaries. Longeuay owns a professional multimedia studio in Southern California, and has more than three decades of production and marketing experience. He’s a member of the American Christian Fiction Writers association, and has been a student of biblical Israeli history for more than two decades.


I find myself fascinated with religious history – doesn’t matter the religion. I was also woefully ignorant of the founding of Israel. What I though I knew and what I learned after reading this book about made me cry. I for one have never understood why the Jewish race has been so persecuted throughout time. I am not going to approve any “Jews killed Jesus” comments so don’t bother. Jesus was Jewish and people tend to forget that….but back to the book.


The story was interesting; a young man(Charles) finds a photo of his parents in front of the Technion – the technical school in Palestine – and he doesn’t understand. His father is a full on Nazi and wanted him to join his hate group so Charles runs away to Palestine to try and find out more about his history. A bit of a stretch to say the least given the time period in history and Charles’ age (16) but we have to start somewhere. Charles is a bit of a savant for lack of a better word. His father and mother kept him a virtual prisoner and all he had were books so he read and read and read. His particular interest was engineering. When he gets to the Technion he meets and falls in love with a young lady, Gladia and that meeting will direct the rest of his life.


At times I found the book to be more history lesson than novel but in this case that was OK with me as I knew so little about this time period but it did get a bit dry. I was inspired to google my little heart out at the end to find out what was real and what was not and an author’s note would have been helpful on that end. I am conflicted – I enjoyed the story but parts of it were a bit forced and that includes the romance. I learned a lot about how badly the Jews were treated after WWII as they tried to find a place to live after being forced from their homes in Europe. Was the displacement of the Arab peoples living where they settled any less horrible? No. But the Jews had to go somewhere and no country wanted them. It is, as we a know a question still being fought and the answers are not going to be found in my little blog. But I was glad to have read the book to have at least learned a bit more about how it all started. I somehow doubt I will be alive when it ends.


You can purchase Rebirth on Amazon.com

Disclosure:  I received an ecopy of Rebirth gratis. Any opinions expressed are my honest opinions and were not impacted by my receipt of the free ebook. I received no monetary compensation for this post.