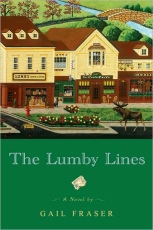 Nestled in the Northwest is a quaint little town that its quirky residents are proud to call home. With charming shops lining its one main thoroughfare, Lumby has the oldest apple tree in the county and the smallest bank in the state. And though it’s hours from the nearest big city, you’ll always find Lumby close to your heart . . .

Nearly destroyed by fire, Montis Abbey remains a ruin on the outskirts of Lumby. Once home to a resourceful order of monks, it stands abandoned, surrounded by its overgrown orchards. Then Mark and Pam Walker, a vacationing couple from the East Coast, stumble upon it — and upon the answer to their prayers. Leaving behind their hectic lives to restore the monastery and turn it into an inn is a dream come true.

But some residents of Lumby take a while to warm up to outsiders. One of them is irascible William Beezer, owner of The Lumby Lines — the newspaper “worth the paper it’s printed on.” At every turn, he tries to hinder the Walkers’ efforts. The couple soon learns that for every citizen like William, there are many more willing to lend a hand, and that Lumby isn’t just a place — it’s a way of life.

Other books in this series include: Stealing Lumby, Lumby’s Bounty, The Promise of Lumby, and Lumby on the Air (coming Spring 2010).

Gail Fraser had a successful career in corporate America holding senior executive and upper management positions in several Fortune 500 and start-up corporations. She lives with her husband, Art Poulin, and their two dogs near Saratoga Springs, New York.

For more information, view Gail Fraser’s Web site.
My Opinion:
Oh my! I think I want to move to Lumby!
In some ways I think I did.
What a fun and delightful book full of some of the quirkiest characters I have ever met. I didn’t want to leave…
Pam and Mark Walker would vacation in Lumby and loved the feeling of peace that they found there. On one trip they discover the burned out Montis Abbey and decide to buy it, refurbish it and open it as an Inn. But small towns are not always welcoming to newcomers and they face some challenges along the way. On the other hand small towns are often the best places to live because neighbors help neighbors. A conundrum, yes?
Running throughout the book are snippets from the local newspaper, The Lumby Lines. Having reveled in my own small town’s newspaper and the things it chooses to report I laughed long and hard at the police reporting of The Lumby Lines.
You will also meet a plastic pink flamingo, an errant moose and flatulent bovine.  What more can you ask for in a book?
The Lumby Lines is available at Amazon.com
Disclosure:  I received a gratis copy of The Lumby Lines from FSB Media for review. Any opinions expressed are my honest opinions and were not impacted by the receipt of the free book. I received no monetary compensation for this post.
Yum
Share
Email
Book Review
Within the Hollow Crown by Margaret Campbell Barnes – Book Review
Blog Tour and Book Review: The Wounds Have Healed…The Scars are Bleeding! by Lindon J. King