Buried near Italy’s Mount Vesuvius is a remarkable observatory containing artifacts dating to the earliest record of human events. Only one person-the Getty Museum’s Amanda James-can unlock the mysterious doors that guard the chamber.
But once inside, Amanda is shocked to discover evidence left behind by a notorious biblical killer-who long ago wandered off the pages of history.
The first novel of a series, Wayward Son takes the reader on an amazing voyage, where epic adventures in Egypt, Greece, China and Rome collide with modern-day intrigue and suspense. 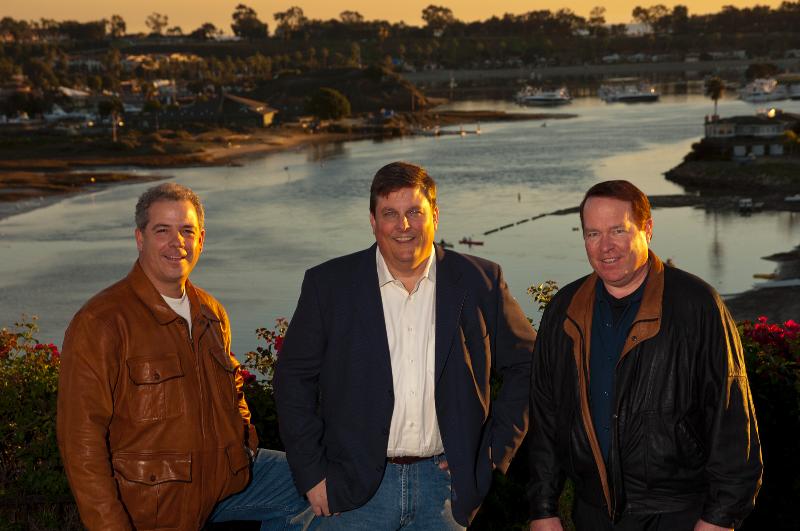 Tom Pollack (center) has a passion for sailing, which led him to a friendship with Roy Disney, and ultimately to the release of Walt Disney Pictures’ critically acclaimed motion picture, Morning Light.  The film is based on Tom’s original idea of documenting the exploits of a group of college-aged sailors recruited to compete against seasoned pros in the Trans-Pacific race from Southern California to Hawaii.
Tom graduated from Loyola Marymount University with a bachelor’s degree in political science.  He resides in Dana Point with his wife, Jennifer, and their two children.  Tom serves as President of the Mission Basilica School Foundation in San Juan Capistrano and the Chairman of ExplorOcean, Newport Beach’s popular nautical museum.

Jim Alves (left) recently completed a 25-year career in bond sales and trading.  He graduated from The University of Massachusetts with a bachelor’s degree in finance and economics.  He currently is Chief Executive Officer of Prometheus Holdings, a financial consulting firm.  Jim resides in San Clemente, California with his wife Jackie and their two young boys, having successfully launched two older sons from the nest.

John Loftus (right) spent 23 years at Pacific Investment Management Company (PIMCO), where as a Managing Director he focused on new product development and marketing. A graduate of Stanford University and the Stanford Graduate School of Business, his writings have been published in various financial journals and textbooks.  Now President of Cascada Productions, John is also active in philanthropy and the non-profit sector.  An Ohio native, John resides in Newport Beach, California, with his wife, Lori.  They have three grown children and two grandchildren.


I get really frustrated with a book when the synopsis strays far from the contents. I go in expecting one thing and I get another. Sometimes that frustration can be alleviated with excellent story telling. Sometimes I get a tale so far removed from what was promised I almost give up and stop reading. This story about a “legendary Biblical killer” proved to be the latter.


It was not ALL bad, though; the passages surrounding Amanda James, the archaeologist called on to investigate a pair of mysterious bronze doors found underground near Mt. Vesuvius were exciting, interesting and drew me into the story. She is a strong woman and very clever. When she enters the secret chamber behind the doors she experiences the “Biblical killer’s” life. I don’t want to give it all away in a review.  My problem with the book was that 80% of it focused on the immortal wanderings of the killer. I started to feel immortal, OY! I feel it could have been condensed without harming the story. I was about to give up several times but held on. (I mean at one point the killer was jailed for 150 years. REALLY?! Did we have to relive them?)


Once the story was brought back into the present it was again very enjoyable. The book is a first in a series and while I would love to know what is going to happen I fear another long winded book. The book is targeted towards a young adult audience and perhaps the history told through the eyes of the “killer” would be an excellent tutorial in the high (and low) points of civilization. Being a student of history (my degree is history) perhaps it was just too much of a repeat for me.


Hopefully the subsequent volumes will tighten up and the focus will be on the war between good and evil; always a good fight to be sure.


You can purchase Wayward Son on Amazon.com


Disclosure:  I received a copy of Wayward Son gratis from Glass Road PR. Any opinions expressed are my honest opinions and were not impacted by my receipt of the free book. I received no monetary compensation for this post.