Within the Hollow Crown by Margaret Campbell Barnes – Book Review

I do enjoy books about the lessor known Kings of England. I thank Sourcebooks for sending me a copy of Within the Hollow Crown by Margaret Campbell Barnes at no charge for my honest review. 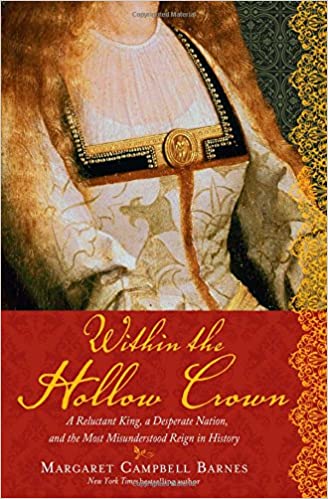 About Within the Hollow Crown:

Unlike his father, the Black Prince, or his namesake, King Richard the Lionheart, Richard II never really wanted to be king. But the mantle of royalty is thrust upon his shoulders at age 11, at a time when England is racked by unrest and class warfare. A leader as unexpected as he is inexperienced, young Richard must find a way to triumph over a fierce conflict more destructive than any foreign enemy.

Richard’s love for his wife, Anne of Bohemia, gave him the strength to outwit the schemes of his enemies and govern as he saw fit, providing England with years of properity under his reign. But when tragedy strikes, Richard begins to loose the common touch by which he had ruled so brilliantly, and begins a downward spiral from which his detractors would derive strength…

Margaret Campbell Barnes was born in 1891 and most of her books were published between 1940s and 1950s.

[close] Margaret Campbell Barnes was born in 1891 and most of her books were published between 1940s and 1950s.

I enjoyed this book. I have to admit to not knowing much about Richard II before I started but now I want to know more. Richard was just 11 when his father died and then 15 when his grandfather died leaving him King at a very young age. He only had glimpses of what it was like to be a child. He was remarkably a peace maker despite the best efforts of his uncles.

He married young and his marriage was a happy one – rare in royal circle. But ultimately all too short.

Since he was so young when he came to power he was slow to use the power he had. He guardian uncles was always trying to sway him one way or the other until he finally let his Plantagenet temper loose. Richard did quell the peasant rebellion and bring peace to England – for a while but the War of the Roses was soon to follow and any student of England’s history knows that peace was a very illusive thing during a good portion of its history.

The book is a re-issue of  one written in 1948 so the rhythm is slightly different from books written today. It is not hard to get used to. There are some sections a bit long on exposition but if you are a history buff like I am they will not bother you. Overall it is a very enjoyable book about a very tragic King.