I received a free copy of Camelot’s Queen from Historical Fiction Virtual Book Tours for my honest review. 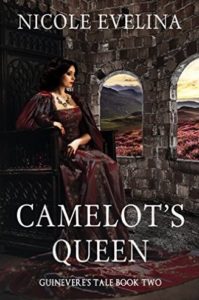 History remembers Guinevere’s sin, but it was Arthur who transgressed first.

Forced into a marriage she neither anticipated nor desired, Guinevere finds herself High Queen, ruling and fighting alongside Arthur as they try to subdue the Saxons, Irish and Picts who threaten Britain from every direction. Though her heart still longs for her lost love, Guinevere slowly grows to care for her husband as they join together to defeat their enemies.

Meanwhile, within the walls of Camelot their closest allies plot against them. One schemes to make Guinevere his own, another seeks revenge for past transgressions, while a third fixes her eyes on the throne. When the unthinkable happens and Guinevere is feared dead, Arthur installs a new woman in her place, one who will poison his affections toward her, threatening Guinevere’s fragile sanity and eventually driving her into the arms of her champion.

Amid this tension a new challenge arises for the king and queen of Camelot: finding the Holy Grail, a sacred relic that promises lasting unity. But peace, as they will soon learn, can be just as dangerous as war. As the court begins to turn on itself, it becomes clear that the quest that was to be Arthur’s lasting legacy may end in the burning fires of condemnation.

This highly anticipated sequel to Daughter of Destiny proves there is much more to Guinevere’s story than her marriage and an affair. See the legend you think you know through her eyes and live the adventure of Camelot’s golden days yourself – but prepared to suffer its downfall as well.

Nicole Evelina is a St. Louis historical fiction and romantic comedy writer. Her debut novel, Daughter of Destiny, the first book of an Arthurian legend trilogy that tells Guinevere’s life story from her point of view, has been short-listed for the Chaucer Award in Early Historical Fiction. Camelot’s Queen is its sequel.

Later this year, she will release Been Searching for You (May 10), a romantic comedy that won the 2015 Romance Writers of America (RWA) Great Expectations and Golden Rose contests, and Madame Presidentess(July 25), a historical novel about Victoria Woodhull, America’s first female Presidential candidate, which has been short-listed for the Goethe Award in Late Historical Fiction.

She hopes to have the final book in Guinevere’s Tale available in late 2016 or early 2017.

Nicole is one of only six authors who completed a week-long writing intensive taught by #1 New York Times bestselling author Deborah Harkness. Nicole has traveled to England twice to research the Guinevere’s Tale trilogy, where she consulted with internationally acclaimed author and historian Geoffrey Ashe, as well as Arthurian/Glastonbury expert Jaime George, the man who helped Marion Zimmer Bradley research The Mists of Avalon.

Nicole is a member of and book reviewer for the The Historical Novel Society, and Sirens (a group supporting female fantasy authors), as well as a member of the Historical Writers of America, Women’s Fiction Writers Association, Romance Writers of America, the St. Louis Writer’s Guild, Women Writing the West, Broad Universe (promoting women in fantasy, science fiction and horror), Alliance of Independent Authors and the Independent Book Publishers Association.

She spent 15 years researching Arthurian legend, Celtic Britain and the various peoples, cultures and religious practices that shaped the country after the withdrawal of Rome. Other historical interests include the Middle Ages and women who made their mark on history. She’s also a frequent visitor to Chicago, where Been Searching for You takes place.

Camelot’s Queen is the second book of a trilogy retelling the story of Camelot from Guinevere’s point of view rather than Arthur’s. The first book, Daughter of Destiny, introduced the reader to Guinevere as a child as she headed off to her training as a priestess of the Goddess. Her future is foreshadowed in a number of ways but nothing is written in stone. That book ended with her engagement to King Arthur and this second book picks up at their wedding.

Unlike the sugar coated musical that most of us think of when conjuring Camelot, this book is a force of nature. These characters are fully formed and jump to life on the page. It’s a harsh time Ms. Evelina does not ignore the evil that man can do in the pursuit of power.

But this is ultimately Guinevere’s story and it shows a strong woman yet one still conflicted by her emotions for the men in her life. She suffers some personal and very emotional blows and Arthur lets her down in many ways. So do other people close to her and she finds old enemies are never far away. As she tries to navigate the complicated waters all around her she finds only one person she can truly count on.

Much like the first book, this is a real page turner. It’s full of strong, fascinating, well developed characters on both sides of the story. If you thought you knew the Camelot legend you have a whole new world coming to you. This Guinevere is different kind of queen. There are a lot of mystical elements involved and I truly enjoyed how they were woven into the tale. Some questions were answered from the first book but now others remain to be addressed in the third. I fear it will be a long wait for the wrap up of this excellent trilogy but it will be a wait well worth it.

You can read my review of Daughter of Destiny

You can purchase Daughter of Destiny on Amazon.com