Beatriz Williams is a new author to me which is surprising given how many books she has written. I love when I find a new to me author. A Certain Age is her latest and I thank  TLC Book Tours for sending me a free copy for my honest review. 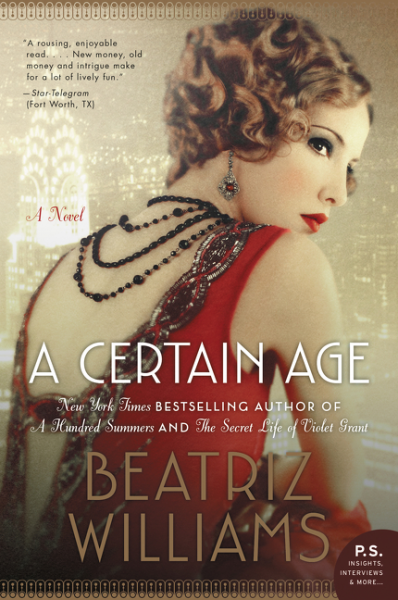 About A Certain Age:

The bestselling author of A Hundred Summers brings the Roaring Twenties brilliantly to life in this enchanting and compulsively readable tale of intrigue, romance, and scandal in New York Society, brimming with lush atmosphere, striking characters, and irresistible charm.

As the freedom of the Jazz Age transforms New York City, the iridescent Mrs. Theresa Marshall of Fifth Avenue and Southampton, Long Island, has done the unthinkable: she’s fallen in love with her young paramour, Captain Octavian Rofrano, a handsome aviator and hero of the Great War. An intense and deeply honorable man, Octavian is devoted to the beautiful socialite of a certain age and wants to marry her. While times are changing and she does adore the Boy, divorce for a woman of Theresa’s wealth and social standing is out of the question, and there is no need; she has an understanding with Sylvo, her generous and well-respected philanderer husband.

But their relationship subtly shifts when her bachelor brother, Ox, decides to tie the knot with the sweet younger daughter of a newly wealthy inventor. Engaging a longstanding family tradition, Theresa enlists the Boy to act as her brother’s cavalier, presenting the family’s diamond rose ring to Ox’s intended, Miss Sophie Fortescue—and to check into the background of the little-known Fortescue family. When Octavian meets Sophie, he falls under the spell of the pretty ingénue, even as he uncovers a shocking family secret. As the love triangle of Theresa, Octavian, and Sophie progresses, it transforms into a saga of divided loyalties, dangerous revelations, and surprising twists that will lead to a shocking transgression . . . and eventually force Theresa to make a bittersweet choice.

Full of the glamour, wit and delicious twists that are the hallmarks of Beatriz Williams’ fiction and alternating between Sophie’s spirited voice and Theresa’s vibrant timbre, A Certain Age is a beguiling reinterpretation of Richard Strauss’s comic opera Der Rosenkavalier, set against the sweeping decadence of Gatsby’s New York.

Read my reviews of The Wicked City and Cocoa Beach

This is a book taken from an opera an “updated” to the Jazz Age. We have an married to an older man but having an affair with a younger man whose brother is looking to marry a younger woman. It’s all very polite, at times too polite. Our matron, Theresa refers to her lover as Boy which I have to admit bothered me immensely throughout the novel. every time I read it I cringed. It got so I almost didn’t want to finish the book because I found it so aggravating and insulting.

The sister’s lover is part of the formal proposal to the brother’s new love – you’ll have to read the book I’m not going to explain it here – and this meeting leads where you expect it to, but it also takes the reader to many unexpected places. By the time you get to the end of the book you realize how perfectly set up you have been.

I realize I’m being coy here – it’s hard not to be because it’s a somewhat twisty tale and I don’t want to spoil the plot even though this one main female character bothered me so much. Yes, the book is a little too predicable at times but it was good distraction from heavier reading.

Share
Tweet
Yum
Share
Email
Gardening with Chickens: Plans and Plants for You and Your Hens by Lisa Steele
Pulitzer Prize Winning Author Glenn Frankel is Coming to Montana