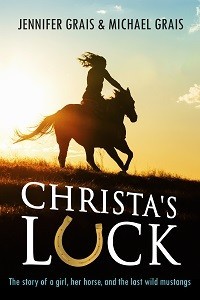 Inspired by a real horse rescue, Christa’s Luck is a teen fiction novel about Christa’s love for an endangered herd of wild horses and how her special connection with them inspires her to look beyond her own unforgivable mistakes and try again. She rises up to become a horse advocate at fourteen, whose passion and heart move an entire town to take action.

“In Michael and Jennifer Grais’ YA novel, a 13-year-old’s fate intertwines with that of the legendary Lost Herd of wild mustangs that roam the canyons of Nevada.

Christa Cassidy knows that she’s lucky. She lives with her parents and older sister on a small ranch in a beautiful part of the world; she has a grandmother who loves her; and she’s expecting a baby sister before the end of the summer. She even has her own horse named Lucky. But like any other teenager, she’s suspended between childhood and adulthood, unsure of her place in the world, at odds with her family, and uncomfortable with the way she looks, talks, acts, and feels. She’s really only at home when she’s sitting on a horse—particularly when she’s trying to track the Lost Herd through the canyons around her home. But when something horrible happens to Lucky, Christa’s world is upended, and things only get worse when it becomes clear that the Bureau of Land Management intends to round up the mustangs. With the help of a strong, troubled horse named Jenner, Christa is determined to figure out what’s going on. She soon finds that she must rein in her own passions as well as her horses, and that she won’t accomplish anything without friends and help.” Kirkus Reviews

In the vein of The Horse Whisperer and the Black Stallion, Christa’s Luck is an epic adventure story of courage, friendship and freedom.

Jennifer Grais is a singer-songwriter who recorded several albums in Los Angeles and Nashville and toured as Jackson Browne’s background singer.  When she met Michael and they moved to the rural area of Topanga Canyon, CA, her childhood passion for horses was rekindled. She completed a year-long program of study with Linda Kohanov, best-selling author of “The Tao of Equus”, and “Riding Between the Worlds,” and began exploring a deeper relationship with horses. In December 2006, she was captivated by footage of a horse rescue that took place during a flood in the Netherlands at the hands of women riders. The drama of the rescue inspired the novel, “Christa’s Luck,” a young adult novel co-authored by Michael Grais. Research for the novel exposed Jennifer to the unfolding drama of the wild mustangs in the western United States and became the primary plot of the book. Read more about Jennifer and the inspirations behind Christa’s Luck.

Michael Grais has written and produced movies of domestic and international acclaim including Death Hunt, Poltergeist, Poltergeist II, Marked for Death and Cool World and more.
Michael has also contributed to the book Why We Write and has taught filmmaking at University of New Mexico and in various workshops abroad. After attending New York University’s Film School and Emerson College, he earned his MFA in Creative Writing from the University of Oregon. Read more about Michael Grais.

Michael and Jennifer currently live in Northern California with their horse, Solo and two cats Francesca and Finnegan.

For more information about the wild horse issue in America, please read Return to Freedom and Love Wild Horses.

Every now and again I pick up a YA book (this is my second one in six weeks so there must be something in the air!) Christa’s Luck appealed to me ’cause I have always loved horse. I used to ride when I was a teenager and given more land and lots more money I’d have a horse now – well, after the llama and the pig. I’ve seen the wild horses at Chincoteague in Virginia but wasn’t lucky enough to see the mustangs of the west. I know the roundups have been controversial. I live in a ranching state and it’s a powerful lobby – just ask the poor bison. But that’s another story altogether.

Christa is teenager full of all of the angst that the age brings. Her best friend is her horse Lucky. Her sister is perfect and it seems that Christa can do nothing right. She finds a passion when she sees The Lost Herd, a band of mustangs known mostly as legend. She wants to make sure they stay wild but she has a long road to go.

Christa is hard to like sometimes but teenagers are challenging in real life and that just proves that she is a well written, fully developed character. She really finds herself through her love of the wild horses and that is something all teens need. There are parts of the story – particularly the ending that just seem to serve the purpose of the ending that I struggled with – and it’s not just in the reading of a YA book. I’ve read many that I’ve enjoyed wholeheartedly. But this is a book that I believe many adults and most teens – especially those that love horses will truly enjoy.

One lucky US reader will win a copy of Christa’s Luck. Just enter as many ways as you would like on the Gleam widget below.  Good luck everyone.

Yum
Share
Email
Christa's LuckJennifer GraisMichael Grais
The State of the Garden August 1, 2015
Using A Weather Station to Help on the Farm