I was reading my Facebook feed and this recipe came through on Fine Cooking’s stream and it called to me – German Chocolate Bombes:

The photo just grabbed my attention and I adore German chocolate cake. I decided I just had to make them. I really wasn’t worried about putting them together – I’m pretty confident in the kitchen so I looked at the ingredients, sent hubby off with a shopping list and FORGOT THE MOST IMPORTANT PART OF ANY NEW RECIPE.

Read the whole damn thing before you start.
*sigh*
I wondered how they got to be so nice and roundish but figured it took an ice cream scoop, blah, blah, blah. It takes a bombe mold. A silicone bombe mold. This I learned as I had all of the components in front of me ready to be turned into bombes.
*sigh again*
I am going to purchase the damn molds so I can make them properly.
Fortunately I am quick on my feet and I have a pretty well stocked kitchen.
I improvised. I used a mini cheesecake pan.
They worked, they tasted divine but they weren’t technically bombes… 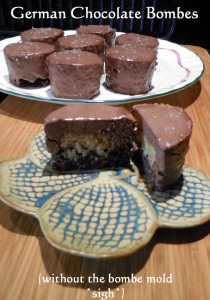 PRINT THIS RECIPE at FineCooking.com

For the chocolate mousse

Position a rack in the center of the oven and heat the oven to 325°F. Coat a 13×18-inch rimmed baking sheet with cooking spray.
Put the chocolate and cocoa in a medium heatproof bowl, add the boiling water, and whisk to combine and melt the chocolate. Set aside to cool slightly. In a small bowl, combine the flour, baking soda, and salt.
Beat the sugar and butter in a stand mixer fitted with the paddle attachment on medium speed until light and fluffy, 3 to 5 minutes, stopping to scrape the bowl halfway through. Add the eggs one at a time, beating well after each addition.
Slowly add the buttermilk and vanilla—the batter will look curdled at this point. Reduce the mixer speed to low. Alternate adding the flour mixture (in 3 additions) with the chocolate mixture (in 2 additions), ending with the flour mixture. Scrape the batter into the prepared pan and tap the pan on the counter to level the batter. 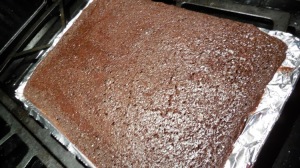 Bake until the cake springs back when poked in the center with a finger, about 20 minutes. Cool completely in the pan on a wire rack. (Well-wrapped, the cake will keep for up to 2 days in the refrigerator, or up to 1 month in the freezer.)

Pulse the coconut and pecans in a food processor until they resemble coarse cornmeal.
Combine the sugar, butter, egg yolks, evaporated milk, and vanilla in a 3-quart saucepan. Cook over medium-low heat, stirring constantly with a spoon or spatula, until the mixture is thick enough to coat the spoon and hold a trail when a finger is drawn through it, 6 to 7 minutes. Transfer to a stand mixer fitted with the whisk attachment and whip on high speed until cooled, fluffy, and slightly lightened in color, 6 to 10 minutes. Add the coconut-pecan mixture and beat on medium speed until combined, 1 minute more. Refrigerate until ready to use. (You can refrigerate the filling for up to 1 week.)

Melt the chocolate and butter in a large bowl set in a skillet of barely simmering water. Remove from the heat and stir with a spatula to combine. Set aside to cool slightly.
Whip the egg whites in a clean stand mixer fitted with a clean whisk attachment on medium-high speed to soft peaks, 1 to 2 minutes. Slowly add the sugar and continue to whip to stiff peaks, 3 to 4 minutes.
In a medium bowl, whip the cream with a whisk or electric hand mixer to medium-stiff peaks.
In a small bowl, combine the egg yolks, vanilla, and salt. Mix the egg yolk mixture into the chocolate mixture with a spatula. Fold in the whipped egg whites, then fold in the whipped cream—there shouldn’t be any visible streaks.

Set two silicone bombe molds that hold at least 5 bombes each (3-1/4-inch diameter and 1/2-cup capacity) on a 13×18-inch rimmed baking sheet. (HA HA HA! If you do not have bombe molds go to the end of the recipe and I will show you what I did.)
Turn the cake out onto a cutting board. Use a 3-1/8-inch round cutter to cut 10 circles from the chocolate cake. Reserve the remaining cake for another use.
Scoop about 1/4 cup of the mousse into each mold and smear it evenly all over the insides of the molds with the back of a small spoon. Refrigerate or freeze until set, 10 to 20 minutes. Evenly distribute the coconut-pecan filling among the molds (about 2-1/2 Tbs. each), and then gently press a cake circle into each mold. Cover with plastic wrap and freeze overnight.
Unmold the frozen bombes one at a time onto a wire rack set in a rimmed baking sheet. Let sit until nearly room temperature, 2 to 3 hours.

Put the chopped chocolate and corn syrup in a medium stainless-steel bowl. In a small saucepan, heat the cream over medium-high heat until just boiling, then pour it over the chocolate mixture and let sit for 3 minutes. Whisk gently until smooth. Transfer to a liquid measuring cup for easy pouring.
Pour the glaze evenly over the bombes to coat them completely. Refrigerate until set, about 2 hours. (Glaze the bombes no more than 8 hours in advance.)
Let the bombes sit at room temperature for about 30 minutes before serving.
What I Did:

Since I did not have bombe molds I used my mini cheesecake pan. This is a pan with 12 holes with removable bottoms. I sprayed the openings with cooking spray. 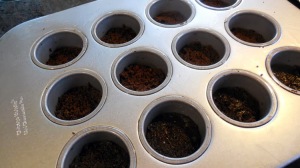 I cut circles of cake with a 2″ biscuit cutter and put them in the bottom. I put some of the chocolate mousse into a disposable cake decorating bag with a plain tip. 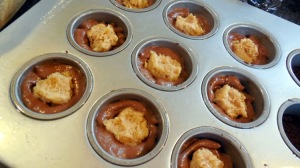 I piped a circle of mousse around the edge of the cake leaving the center open. I then added in about a teaspoon of the coconut/pecan filling. For a few of them I had made a cherry filling for the hubby because he does not like coconut. I then filled them in with chocolate mousse.

I had a fair bit of all three components left over so I took a small pyrex bowl and I treated it like the bombe mold; I filled it with mousse but spread it down the sides, added the filling and topped it with a piece of cake. I put the bowl and the minis into the freezer. When they were frozen I pulled them out to glaze. 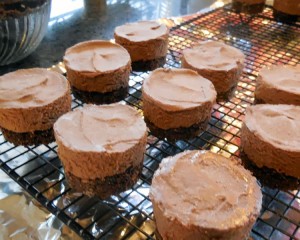 Removing the minis was quite easy. I just put some hot water in the sink and held the pan in the water for about 20 seconds. Then I pushed up from the bottom. They all came out perfectly. 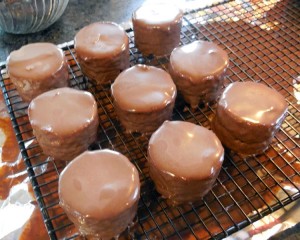 I took my time pouring the glaze over the top of the little cakes making sure to coat all of the sides. It took a couple of go-rounds. I then sprinkled a bit of edible glitter on top. 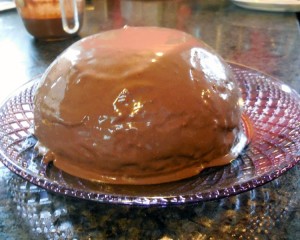 The larger bombe in the bowl un-molded the same way and I glazed it as well. Not very pretty but very tasty! 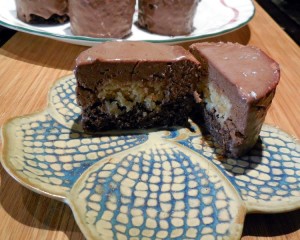 The little cakes were a delight! The perfect size for a little treat. The mousse was rich, light and airy, the cake was almost brownie like and the coconut/pecan filling was delicious. These are a bit of work but definitely worth it!

I hope you all had a very Merry Christmas. I’ll be back with what we had for dinner – Bacon Wrapped Seabass on Roasted Brussels Sprouts and Rice with Apple, Pear and Citrus Salad. Mmmm.

Share
Pin3
Yum
Share
Email
always read your recipe before you startchocolate recipeGerman Chocolate Bombes
The Christmas Tree
Yurtgress: The Bathroom Gets Spiffed Up with Decals from Dezign with a Z