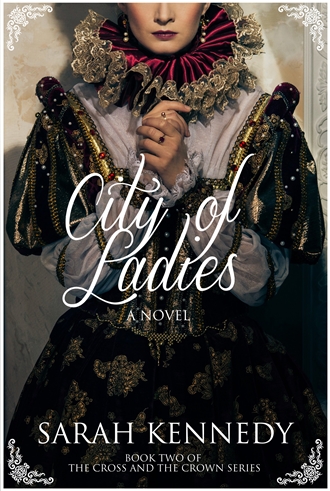 It’s midwinter in 1539, and former nun, Catherine Havens Overton, has just given birth to her second child, a daughter. The convent in which she was raised is now part of her husband’s lands, lands that once belonged to Catherine’s family. With a son, Robert, and her new daughter, Veronica, her life as the mistress of a great household should be complete.

But Henry VIII’s England has not been kind to many of the evicted members of religious houses. And in order to protect her old companions from the hostilities, Catherine has gathered about her a group of former nuns in hopes of providing them a chance to serve in the village of Havenston, her City of Ladies.

Catherine’s past haunts her. Her husband begins to suspect that Robert is not his child. Then the women of Overton House begin to disappear and one of them is found brutally murdered nearby. Seizing the moment, under the pretense of ensuring her safety, William forces Catherine to enter service at Hatfield House where the young Elizabeth Tudor lives.

Reluctantly, Catherine obeys, only to find herself serving not only the Protestant Elizabeth but also the shamed Catholic Mary Tudor. As the murders in Yorkshire continue to mount and her loyalty to the Tudor sisters grows more complicated, Catherine must uncover the secret of the killer and save her City of Ladies.

Sarah Kennedy is a professor of English at Mary Baldwin College in Staunton, Virginia and the author of seven books of poems. She holds a PhD in Renaissance Literature and an MFA in Creative Writing. Sarah has received grants from both the National Endowment for the Arts and the Virginia Commission for the Arts and is currently a contributing editor for Shenandoah.

I did not read the first book in this series, The Altarpiece – it’s on my tablet – but I didn’t feel any loss for not having done so. Catherine Overton is a former nun now married to a man of some means who owns the lands where her nunnery was. Her fellow sisters had nowhere to go after Henry VIII took the lands and redistributed them so she gathered them close giving them a place to live and a purpose but the people in the village are suspicious and think their knowledge of ready, writing and healing makes them witches. As they start turning up dead her husband removes her to a place in the service of the young lady Elizabeth – no longer princess as her father has declared her a bastard with the birth of Prince Edward.  But Catherine’s ladies keep dying – being murdered if truth be told.

This is a rather dark book with a sense of fear and foreboding hanging over the whole of it.  Given the time period I can certainly understand why – Henry VIII wasn’t generally known as a friendly guy. Showing any belief other than the one he espoused could get you arrested and Catherine still held her Catholic upbringing in her heart. She was a highly intelligent woman in a time that didn’t appreciate them.

I found the book to start a bit slowly but by the time I was about a quarter of the way in I was hooked and had a hard time putting it down to go to sleep at night and one night I just didn’t until I finished. Catherine is a fascinating character and I hope to find time to be able to read the first book in the series. This tale ends with the promise of the third book and since we all know what Tudor history brings we know that Catherine has a bit of a minefield ahead as a Catholic leaning woman in a changing world. The plot is complex and my only complaints come in the portrayals of the two princesses – the personalities don’t seem to ring true to what I’ve read in other historical novels. Now Elizabeth is but a five year old child so there is not much to do with her but make her a bit of a brat but Mary was portrayed as a bit of a lunatic. I know she did go a bit off the deep end at the end of her life but I’ve not read much that indicated she was this crazy in the early part of her life.

Overall I enjoyed the mystery and look forward to the third installment.

You can preorder City of Ladies from Amazon.com (releases November 11, 2014)