I received a free copy of The Confessions of Marie Antoinette from Historical Fiction Virtual Book Tours for my honest review. I received no compensation for this post. 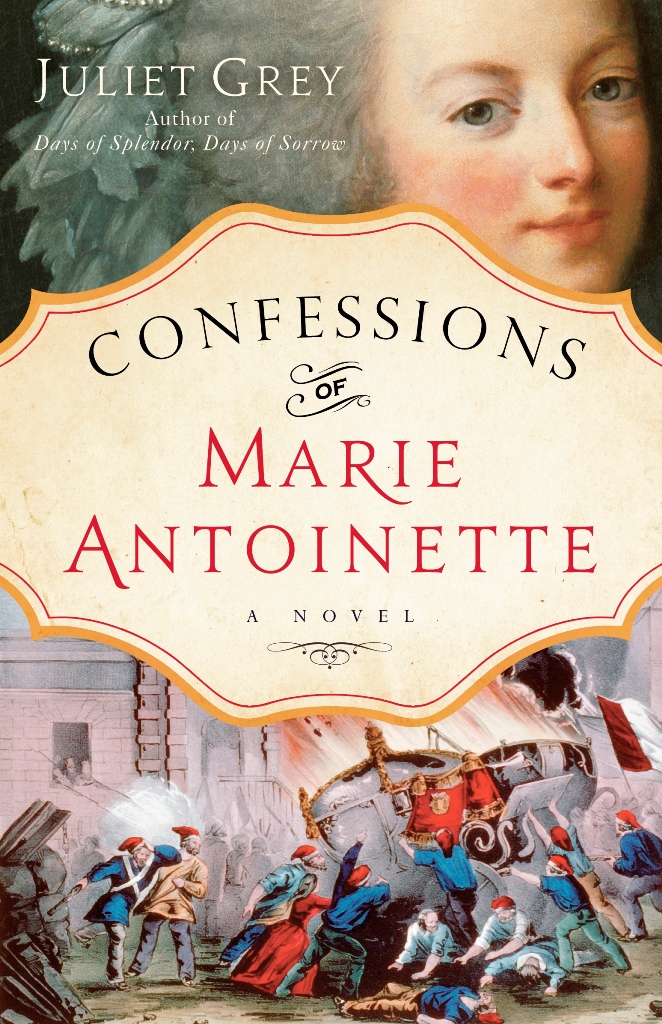 
Publication Date: September 24, 2013
Ballantine Books
Paperback; 464p
ISBN: 0345523903
Confessions of Marie Antoinette, the riveting and sweeping final novel in Juliet Grey’s trilogy on the life of the legendary French queen, blends rich historical detail with searing drama, bringing to life the early years of the French Revolution and the doomed royal family’s final days.
Versailles, 1789. As the burgeoning rebellion reaches the palace gates, Marie Antoinette finds her privileged and peaceful life swiftly upended by violence. Once her loyal subjects, the people of France now seek to overthrow the crown, placing the heirs of the Bourbon dynasty in mortal peril.
Displaced to the Tuileries Palace in Paris, the royal family is propelled into the heart of the Revolution. There, despite a few staunch allies, they are surrounded by cunning spies and vicious enemies. Yet despite the political and personal threats against her, Marie Antoinette remains above all a devoted wife and mother, standing steadfastly by her husband, Louis XVI, and protecting their young son and daughter. And though the queen and her family try to flee, and she secretly attempts to arrange their rescue from the clutches of the Revolution, they cannot outrun the dangers encircling them, or escape their shocking fate.


Juliet Grey is the author of Becoming Marie Antoinette and Days of Splendor, Days of Sorrow. She has extensively researched European royalty and is a particular devotee of Marie Antoinette, as well as a classically trained professional actress with numerous portrayals of virgins, vixens, and villainesses to her credit. She and her husband divide their time between New York City and southern Vermont.
For more information please visit www.becomingmarie.com.

Le sigh. As I read this book I felt much as I did when I read the first book of this riveting trilogy – even though I knew exactly what was going to happen, I knew the twists, the turns, the tidbits that there were to know about Marie Antoinette, this book kept me turning the pages hoping against hope that history had somehow changed.

This third installment picks up as the citizens of France basically take their monarchs prisoner at Versailles and bring them to Paris. While the people of France revel in their supposed freedoms, the royals are kept rather like animals in a zoo. They are on display all the time and errant people at odd times just show up to chat or even climb into their rooms. As the political climate deteriorates an escape is planned but the whole affair is like a Keystone Cops movie rather than the flight of the King and Queen of France. Yet the story is true and ultimately very, very fatal. I’m not giving away any spoilers here – unless the reader is completely ignorant of the fates of Louis XVI and the woman the people of France never came to love.

I was not fortunate enough to read the book at the center of the trilogy, Days of Splendor, Days of Sorrow which covered the high points of Marie Antoinette’s reign in France. The books are sympathetic to her but they also show her for what she was; a somewhat self centered woman who was born to be a queen. A woman who was told from birth that she was better than everyone else and yet she became a woman capable of great love for a country that hated her and a King who didn’t understand her.

I really wish I had been able to read this book at another time of year. At a time of year when I could have just sat down and read it from start to finish in one sitting. But I had the misfortune to have it during harvest season so I read it in heady bursts of immersion into the magical world created by Ms. Grey as she led me to Marie Antoinette’s ultimate demise. I really didn’t want the book to end and I really wanted her to succeed in getting away this time, but alas, like always they get caught and she loses everything. A very sad end for such a fascinating woman.

You can see Confessions of Marie Antoinette Tour Schedule

You can read my review of Becoming Marie Antoinette

One lucky US reader will win a copy of Confessions of Marie Antoinette. How do you win? It’s easy! Just hop on the Rafflecopter. Good luck everyone!

Disclosure:  I received a free copy of Confessions of Marie Antoinette from Historical Fiction Virtual Book Tours for my honest review. I received no compensation for this post.