The Confessions of Young Nero by Margaret George – Book Review

I received a free copy of The Confessions of Young Nero for my honest review. 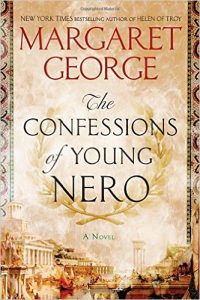 The New York Times bestselling and legendary author of Helen of Troy and Elizabeth I now turns her gaze on Emperor Nero, one of the most notorious and misunderstood figures in history.

Built on the backs of those who fell before it, Julius Caesar’s imperial dynasty is only as strong as the next person who seeks to control it. In the Roman Empire no one is safe from the sting of betrayal: man, woman—or child.

As a boy, Nero’s royal heritage becomes a threat to his very life, first when the mad emperor Caligula tries to drown him, then when his great aunt attempts to secure her own son’s inheritance. Faced with shocking acts of treachery, young Nero is dealt a harsh lesson: it is better to be cruel than dead.

While Nero idealizes the artistic and athletic principles of Greece, his very survival rests on his ability to navigate the sea of vipers that is Rome. The most lethal of all is his own mother, a cold-blooded woman whose singular goal is to control the empire. With cunning and poison, the obstacles fall one by one. But as Agrippina’s machinations earn her son a title he is both tempted and terrified to assume, Nero’s determination to escape her thrall will shape him into the man he was fated to become—an Emperor who became legendary.

With impeccable research and captivating prose, The Confessions of Young Nero is the story of a boy’s ruthless ascension to the throne. Detailing his journey from innocent youth to infamous ruler, it is an epic tale of the lengths to which man will go in the ultimate quest for power and survival.

Margaret George specializes in epic fictional biographies of historical figures, taking pains to make them as factually accurate as possible without compromising the drama. Her THE AUTOBIOGRAPHY OF HENRY VIII had its 30th anniversary this past September, and continues to be popular. ABC-TV based its 1999 Emmy-nominated “Cleopatra” miniseries on her THE MEMOIRS OF CLEOPATRA. All of her books have been bestsellers, with twenty-one foreign translations.

Margaret’s father was in the Foreign Service and so she lived overseas for her early life, in such different places as tropical Taiwan, desert Israel, and cold war Berlin, all of which were great training for a novelist to be. She started writing ‘books’ about the same time as she could write at all, mainly for her own entertainment. It was a diversion she never outgrew. Her published works are: THE AUTOBIOGAPHY OF HENRY VIII, MARY QUEEN OF SCOTLAND AND THE ISLES, THE MEMOIRS OF CLEOPATRA, MARY CALLED MAGDALENE, HELEN OF TROY, ELIZABETH I, and an illustrated children’s book, LUCILLE LOST. Her newest one, THE CONFESSIONS OF YOUNG NERO, is coming out in March 2017.

Margaret lives in Madison, Wisconsin, and Washington DC, and has a sextagenarian tortoise as a pet.

I will start by noting that I have read all of Ms. George’s books; she is one of my favorite authors so I was very excited to see something new and to learn that there is a second book in the series. Perhaps it’s bias but I love going into a book just knowing it’s going to be good. There are a few authors that I completely trust that will be true when I pick up their books and Ms. George is up at the top of that list.

In this new book she brings the Roman emperor Nero to life – you know about Nero, right? The guy who fiddled while Rome burned. Would it surprise you to learn that not everything written about Nero is true? Would it surprise you to learn that some of the more provocative and horrible things written about him were true? But which are and which were a product of the old “history is written by the victors” school of smear the losers so we winners look all the better? That question gets trickier to answer when an author is dealing with a figure who lived so very long ago. Not much written record has survived and much of what is available was written many years after Nero’s demise.

Ms. George does an excellent job of reading between the lines of history to parse the best and the worst of our hero to present a story of a young man who was really never meant to rule but who had a mother who was determined that he would. The book is told in his voice and it starts from when he is very young – 4 years old – and he is a very prescient child. This was the only (minor) complaint I had with the book. It seemed that the narration maintained its tone for the bulk of Nero’s early life despite beginning at such an early age. It changes towards the end as he comes into his power but for a good third of the book Nero’s voice is similar whether he is a toddler of 4 or a preteen. This is minor and picky but there you go.

Other than that I loved, loved, loved this book. It took me back to one of my favorite times in history to one of the emperors about which I didn’t know as much as I would like. Nero is a very complicated character and he admittedly did some awful things but somehow in context and compared to some of the rest of his family he almost seemed angelic. Not to forgive him his actions by any mean but to at least refute some of the worst wrongs of his reputation.

The book is a page turner that brings ancient Rome to life for the reader; the architecture, the food, the raucous parties and the machinations of power. It’s a tale of a mother’s desire for power for not just for son but for herself. It’s a story of love and hate, revenge and all that comes with money and power. It’s also the story of a young man who was a poet, musician and strong proponent of the arts at a time when most were not.

Read it. Learn about this compelling and complex man.