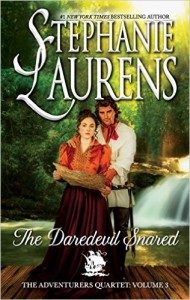 Welcome to the next stop on The Daredevil Snared Virtual Tour from TLC Book Tours. I am very happy to be hosting Excerpt #5. Be sure you have visited the previous blogs on the tour to read the first four. After you have done that check out the reviews and then enter to win!

“The vivid narrative, combined with quick cuts from scene to scene, make for an engrossing read with an ending poised to continue the adventure with yet another Frobisher brother.” –Publishers Weekly STARRED review

He reached out, tugged her right hand free, smoothly raised it to his lips, and brushed a kiss across her knuckles. “Pax, Katherine—I may call you that, mayn’t I?” When, rather stiffly—or was it dazedly?—she inclined her head, he smiled. “We need to accept what’s happened and go forward—all right? No further apologies necessary on anyone’s part.”

Katherine found herself nodding…then he released her hand, and the vise about her lungs eased, and she managed to drag in another breath and haul her wits from where they’d gone. She studied him for a moment more. “Do you always get your own way?”

His grin was unrepentant. “Usually.”

Of course, his tone made everything seem all right. She watched as his gaze grew distant—and realized he was already doing as he’d said and moving forward. “Come.” She turned to the door. “I’ll take you to the men’s hut. Your friends will most likely be there.”

“You know,” he said, as he fell in beside her, “I’m actually looking forward to working out the ways to ensure that Dubois lives to regret ever having set eyes on me, let alone so arrogantly bringing me and my men into his compound.”

There was that deeper persona again, lending strength, determination, and a visceral edge to what could have been light words.

As they left the medical hut, with him pacing, alert and observant, by her side, she felt a buoyancy, a lightness, she hadn’t felt for months. His impact; he was such a positive sort of person—and exactly the sort of man all those in the compound had needed to appear.

Dubois had been wrong. Fate hadn’t smiled on him.

It had smiled on the captives and sent Caleb Frobisher to rally them.

Responsibility knocks, and a reckless, hedonistic man responds and opens the door to love—thus is a daredevil snared.

#1 New York Times bestselling author Stephanie Laurens brings you the third installment in THE ADVENTURERS QUARTET, continuing the drama of Regency-era high seas adventure, laced with a mystery shrouded in the heat of tropical jungles, and spiced with the passionate romances of four couples and their unexpected journeys into love.

Captain Caleb Frobisher, hedonistic youngest son of a seafaring dynasty, wants to be taken seriously by his family, and understands he has to prove himself sufficiently reformed. When opportunity strikes, he seizes the next leg of the covert mission his brothers have been pursuing and sails to Freetown. His actions are decisive, and he completes the mission’s next stage—but responsibility, once exercised, has taken root, and he remains in the jungle to guard the captives whose rescue is the mission’s ultimate goal.

Katherine Fortescue has fled the life of poverty her wastrel father had bequeathed her and come to Freetown as a governess, only to be kidnapped and put to work overseeing a child workforce at a mine. She and the other captured adults understand that their lives are limited by the life of the mine. Guarded by well-armed and well-trained mercenaries, the captives have been searching for some means of escape, but in vain. Then Katherine meets a handsome man—a captain—in the jungle, and he and his crew bring the sweet promise of rescue.

The sadistic mercenary captain who runs the mine has other ideas, but Caleb’s true strength lies in extracting advantage from adversity, and through the clashes that follow, he matures into the leader of men he was always destined to be. The sort of man Katherine can trust—with her body, with her life. With her love.

The first voyage is one of exploration, the second one of discovery. The third journey brings maturity, while the fourth is a voyage of second chances. Continue the journey and follow the adventure, the mystery, and the romances to the dramatic end.

Share
Tweet
Pin
Share
Email
blog tour and excerptStephanie LaurensThe Daredevil Snared
What to do in Missoula: Montana Greek Festival – Holding Out for a Gyro
Silk for Summer is Perfect for a Day Out with Friends