Emelia Bassano Lanyer was not a name familiar to me until I started seeing book review offers come my way. I will admit to a certain ignorance about Shakespeare so if I had known more about him perhaps I would have known more about her. Nonetheless I was pleased to have been sent a copy of Dark Lady at no cost for my honest review. Read on to learn more if you, like me were unaware of this important figure in women’s history. 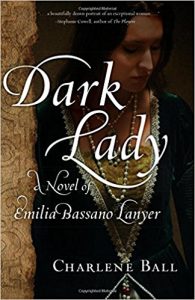 Emilia Bassano has four strikes against her: she is poor, beautiful, female, and intelligent in Elizabethan England. To make matters worse, she comes from a family of secret Jews. When she is raped as a teenager, she knows she probably will not be able to make a good marriage, so she becomes the mistress of a much older nobleman. During this time she falls in love with poet/player William Shakespeare, and they have a brief, passionate relationship―but when the plague comes to England, the nobleman abandons her, leaving her pregnant and without financial security.

In the years that follow, Emilia is forced to make a number of difficult decisions in her efforts to survive, and not all of them turn out well for her. But ultimately, despite the disadvantaged position she was born to, she succeeds in pursuing her dreams of becoming a writer―and even publishes a book of poetry in 1611 that makes a surprisingly modern argument for women’s equality.

Charlene Ball holds a PhD in comparative literature and has taught English and women’s studies at colleges and universities. Although she has written nonfiction, reviews, and academic articles, writing fiction has always been her first love. She has published fiction and nonfiction in The North Atlantic Review, Concho River Review, The NWSA Journal, and other journals. She has reviewed theater and written articles on the arts for Atlanta papers. She is a Fellow of the Hambidge Center for the Arts and held a residency at the Wurlitzer Foundation of New Mexico. She attends fiction workshops by Carol Lee Lorenzo, and she belongs to a writers’ group that she helped found. She retired from the Women’s Studies Institute (now the Institute for Women’s, Gender, and Sexuality Studies) at Georgia State University in 2009 and has been busier than ever with writing and bookselling. She also volunteers with her congregation and other social justice groups. She and her wife, Libby Ware, an author and bookseller, were married in May 2016.

This is the second book in a year I have read on this woman about whom I knew absolutely nothing. Her main reasons for being remembered are for being the first woman to be known as a professional poet. Perhaps not in her day but she did publish a book of her poems and at the time that was extraordinary. She was also rumored to be the “Dark Lady” in Shakespeare’s sonnets.

Her family were the court musicians for Queen Elizabeth and that gave them access to Court but the family was not wealthy. Emilia’s father died young and left her to care for her ailing mother. There were issues as to whether her dowry was still there for her or not but that became moot when she was purported raped and her value as a wife was all but destroyed (’cause you know it must have been her fault and all.) She then became the mistress of the Queen’s cousin and this allowed her to support herself and her mother – until she become pregnant. This created a whole new level of problems that forced her into a marriage with her cousin.

Emelia was always a curious woman, looking to read as much as she could. She was also a talented musician in her own right. It was supposedly through her family connections that she encountered Shakespeare. As to the true nature of their relationship – that is the basis of this fictional tale. I will note that Master Shakespeare does not come off smelling like a rose by any name. He rather comes off like a rat fink.

I will admit that at times the tale wore on me for the stupidity of some of the actions of a “woman in love.” Emilia seemed at times too much a leaf in the wind, unable to do a thing to help herself. Perhaps that was the way of the times, perhaps it was too many shifts in the wind without the slightest twist from the leaf. I don’t know. Overall though it was an interesting – and far different  – look at the life of a woman who did do something no other woman had done before her. It was a feat that should be honored and remembered for too many of these bits of women’s history are lost to time.