I received a free copy of Daughter of Destiny for my honest review. 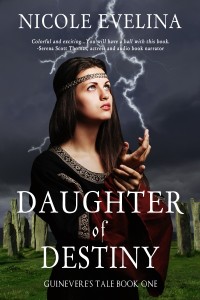 Before queenship and Camelot, Guinevere was a priestess of Avalon. She loved another before Arthur, a warrior who would one day betray her.

In the war-torn world of late fifth century Britain, young Guinevere faces a choice: stay with her family to defend her home at Northgallis from the Irish, or go to Avalon to seek help for the horrific visions that haunt her. The Sight calls her to Avalon, where she meets Morgan, a woman of questionable parentage who is destined to become her rival. As Guinevere matures to womanhood, she gains the powers of a priestess, and falls in love with a man who will be both her deepest love and her greatest mistake.

Just when Guinevere is able to envision a future in Avalon, tragedy forces her back home, into a world she barely recognizes, one in which her pagan faith, outspokenness, and proficiency in the magical and military arts are liabilities. When a chance reunion with her lover leads to disaster, she is cast out of Northgallis and into an uncertain future. As a new High King comes to power, Guinevere must navigate a world of political intrigue where unmarried women are valuable commodities and seemingly innocent actions can have life-altering consequences.

You may think you know the story of Guinevere, but you’ve never heard it like this: in her own words. Listen and you will hear the true story of Camelot and its queen.

Fans of Arthurian legend and the Mists of Avalon will love Daughter of Destiny, the first book in a historical fantasy trilogy that gives Guinevere back her voice and traces her life from an uncertain eleven year old girl to a wise queen in her fifth decade of life.

Nicole Evelina is St. Louis-born historical fiction and romantic comedy writer. Her first four books are coming out in 2016:

1. Daughter of Destiny (January 1 – This is the first book of an Arthurian legend trilogy that tells Guinevere’s life story from her point of view)
2. Camelot’s Queen (March 23 – The second book in the trilogy)
3. Been Searching for You (May 23 – a contemporary romantic comedy that won in the single title romance category of the 2015 Great Expectations Contest (sponsored by North Texas RWA) and the 2015 Gold Rose Contest (sponsored by Portland RWA) and is a finalist in five others.
4. Madame Presidentess (July 25 – Historical fiction about 19th century American Presidential candidate Victoria Woodhull, the first American woman to run for President)

She hopes to have the final book in Guinevere’s Tale available in late 2016 or early 2017.

Nicole is a member of and book reviewer for the Historical Novel Society, and Sirens, a group supporting female fantasy authors, as well as a member of the Romance Writers of America, Women Fiction Writers Association, the St. Louis Writer’s Guild, Women Writing the West and the Alliance of Independent Authors.

She is one of only six authors who completed the first week-long writing intensive taught by #1 New York Times bestselling author Deborah Harkness in 2014. Nicole has traveled to England twice to research the Guinevere trilogy, where she consulted with internationally acclaimed author and historian Geoffrey Ashe, as well as Arthurian/Glastonbury expert Jaime George, the man who helped Marion Zimmer Bradley research The Mists of Avalon.

I love the King Arthur legend. I’ve read more books than I can count about Camelot, etc. That is what initially drew me to this novel. I was very intrigued at looking at the tale from Guinevere’s viewpoint. If you consider the story as we know it now it all falls apart because of her infidelity. But seriously – history or in this case the legend was written by men and therefore it’s got to be the woman’s fault, right? Taking a look at the story through her eyes might be very interesting.

I was hooked from the first paragraph.  I found myself pulled into Guinevere’s world from her trip to the mystical island of Avalon at 11 years of age through her advancement to Priestess and beyond. It is a book of magic and mystery drawing on the tales of the old tribes of what is now England and Ireland. It does require releasing yourself into the time and suspending modern reality to fully enjoy the book but if you do that you will be richly rewarded.

This is the first book of a trilogy and it takes you from Guinevere at 11 just up to her engagement to King Arthur. The bulk of the book covers her time at Avalon as she learns the skills and arts of being a priestess. It is also the beginning of her relationship for lack of a better word with Morgan (Morgaine). Their immediate dislike is never fully explained other than two intelligent, competitive girls trying to be number one. It seems a bit weak as the start of a hatred that causes so much trouble later on. But perhaps there is more to be revealed.

You can read my review of Camelot’s Queen (Book Two)

You can purchase Camelot’s Queen on Amazon.com