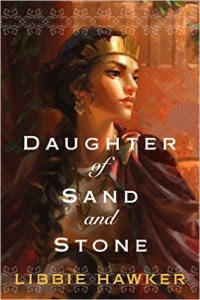 When Zenobia takes control of her own fate, will the gods punish her audacity?

Zenobia, the proud daughter of a Syrian sheikh, refuses to marry against her will. She won’t submit to a lifetime of subservience. When her father dies, she sets out on her own, pursuing the power she believes to be her birthright, dreaming of the Roman Empire’s downfall and her ascendance to the throne.

Defying her family, Zenobia arranges her own marriage to the most influential man in the city of Palmyra. But their union is anything but peaceful—his other wife begrudges the marriage and the birth of Zenobia’s son, and Zenobia finds herself ever more drawn to her guardsman, Zabdas. As war breaks out, she’s faced with terrible choices.

From the decadent halls of Rome to the golden sands of Egypt, Zenobia fights for power, for love, and for her son. But will her hubris draw the wrath of the gods? Will she learn a “woman’s place,” or can she finally stake her claim as Empress of the East?

Libbie Hawker writes historical and literary fiction featuring deeply human characters, with rich details of time and place. She is the author of ten novels, most of which take place in the distant past among ancient civilizations. She lives in the beautiful San Juan Islands with her husband.

I had not heard of Zenobia when I was offered this book to review. I chose to read it because I love books that take place in ancient times. When I learned that is was based in fact I was even more excited to dig in. There are so few strong women in the historical record and to find one from back this far in time is remarkable.

Zenobia was a daughter of a daughter of chieftan of Palmyra. While her sisters behave as women of the time do – marrying the men their father suggest – Zenobia feels she is meant for bigger things. When her father dies she decides to find her own husband and chooses the governor of Palmyra. A man already married and one who is loyal to Rome. Zenobia feels she is following her destiny. Where will that destiny lead her?

Little historical record is left of this strong and amazing woman and most of that comes from Roman writings. Per usual, history is written by the victors and that history cannot always be trusted. Using what record there is Ms. Hawker has crafted a tale of a young woman chasing her future and almost besting Rome in the process. There is such an inspirational and powerful story here and I feel that the fullness of it was not fully realized. At times I wasn’t sure if I was reading a young adult novel and then the tenor would change. It was as if it just skimmed the surface of what could have been.

There is richness of detail in the descriptions of the desert and the clothing worn as well as what it is like to ride a camel. Time passes with few reference points and in odd ways. The beginning of the book moves somewhat – I hesitate to use slowly because that would make you think boring but it is not boring. It just takes the time to develop character and environment. Then the back end of the book just flies along with little time to examine events or places.

All in all though I did enjoy the book, I just wanted so much more. A character like this deserves more I think.

One lucky reader (US/Can) will win a copy of Daughter of Sand and Stone. Just enter as many ways as you would like on the Gleam widget below. Full rules are on the widget. Good luck everyone.

Daughter of Sand and Stone