Daughters of the Nile by Stephanie Dray – Book Review

I received a free copy of Daughters of the Nile from the author for my honest review. 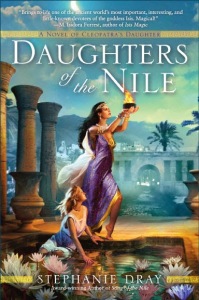 After years of abuse as the emperor’s captive in Rome, Cleopatra Selene has found a safe harbor. No longer the pitiful orphaned daughter of the despised Egyptian Whore, the twenty year old is now the most powerful queen in the empire, ruling over the kingdom of Mauretania—an exotic land of enchanting possibility where she intends to revive her dynasty. With her husband, King Juba II and the magic of Isis that is her birthright, Selene brings prosperity and peace to a kingdom thirsty for both. But when Augustus Caesar jealously demands that Selene’s children be given over to him to be fostered in Rome, she’s drawn back into the web of imperial plots and intrigues that she vowed to leave behind. Determined and resourceful, Selene must shield her loved ones from the emperor’s wrath, all while vying with ruthless rivals like King Herod. Can she find a way to overcome the threat to her marriage, her kingdom, her family, and her faith? Or will she be the last of her line?

STEPHANIE DRAY is a bestselling, multi-published, award-winning author of historical women’s fiction and fantasy set in the ancient world. Her critically acclaimed historical series about Cleopatra’s daughter has been translated into more than six different languages, was nominated for a RITA Award and won the Golden Leaf. Her focus on Ptolemaic Egypt and Augustan Age Rome has given her a unique perspective on the consequences of Egypt’s ancient clash with Rome, both in terms of the still-extant tensions between East and West as well as the worldwide decline of female-oriented religion. Before she wrote novels, Stephanie was a lawyer, a game designer, and a teacher. Now she uses the transformative power of magic realism to illuminate the stories of women in history and inspire the young women of today. She remains fascinated by all things Roman or Egyptian and has-to the consternation of her devoted husband-collected a house full of cats and ancient artifacts.

Daughters of the Nile wraps up the trilogy on Cleopatra Selene, the daughter of the legendary Cleopatra of Egypt and Marc Antony of Rome that started with Lily of the Nile and continued with Song of the Nile. You do have to have read the first two books to enjoy the third but they do add to the richness of all of the characters’ back stories. Such is the power and brilliance of Ms. Dray’s writing skills.

I must admit to a partiality to books that take place in Ancient Rome. It’s a time period that fascinates me and this book is no exception. I had a very hard time putting it down and I suspect had I not been reading it around the holidays I would have finished it within two days but the obligations and general busyness kept me from reading as much as I would have liked. It’s not a short book at just under 600 pages but it read like a novella. I simply did not want it to end but like all good things, end it did. This book covers the period of Selene’s life where she truly comes into her own as queen of Mauretania, mother to her children and goddess of Isis. While Ms. Dray adheres to history she does add a fair bit of magic and mysticism into the tale but it fits both the times and the character. You never feel as if you’ve fallen down some rabbit hole never to return.

Selene and her husband, Juba were historically good rulers of their country. They brought a period of peace that hadn’t been seen before or sadly after they died. In the novel Selene is always trying to do what is best for her family, her dynasty and herself while trying to keep Augustus at bay. There isn’t a single character that is simple or one-note; they are all that complex mixture of good and bad that makes us all human. They grow and learn and the reader shares their triumphs and failures because you become so invested in their stories because of the writing. You enter their worlds and you don’t want to come out. Which makes the ending of the series all the more devastating. I’m not giving anything away or posting any spoilers by telling you that Selene dies and it’s never easy to lose a beloved character when you have been reading through her life for three books.

I highly recommend this series if you are looking for a trip through history with a fascinating woman and a very complicated, calculated and at times downright evil man. As much as this is Selene’s story it would not be what it was without Augustus and Ms. Dray wrote him I believe, as the damaged human he was. Read the books – you won’t be disappointed.

Disclosure: I received a free copy of Daughters of the Nile from the author for my honest review.  I received no compensation for this post.