I find historical novels based on family history to be compelling. I was happy to receive a copy of Dawson’s Fall by Roxanna Robinson from the publisher at no charge for my honest review. 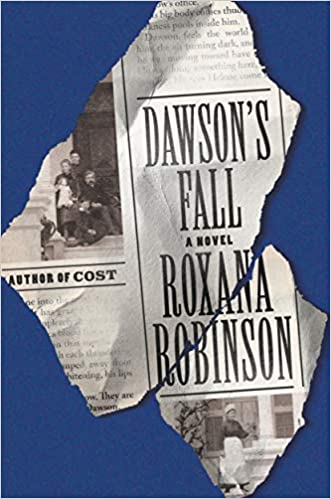 A cinematic Reconstruction-era drama of violence and fraught moral reckoning

In Dawson’s Fall, a novel based on the lives of Roxana Robinson’s great-grandparents, we see America at its most fragile, fraught, and malleable. Set in 1889, in Charleston, South Carolina, Robinson’s tale weaves her family’s journal entries and letters with a novelist’s narrative grace, and spans the life of her tragic hero, Frank Dawson, as he attempts to navigate the country’s new political, social, and moral landscape.

Dawson, a man of fierce opinions, came to this country as a young Englishman to fight for the Confederacy in a war he understood as a conflict over states’ rights. He later became the editor of the Charleston News and Courier, finding a platform of real influence in the editorial column and emerging as a voice of the New South. With his wife and two children, he tried to lead a life that adhered to his staunch principles: equal rights, rule of law, and nonviolence, unswayed by the caprices of popular opinion. But he couldn’t control the political whims of his readers. As he wrangled diligently in his columns with questions of citizenship, equality, justice, and slavery, his newspaper rapidly lost readership, and he was plagued by financial worries. Nor could Dawson control the whims of the heart: his Swiss governess became embroiled in a tense affair with a drunkard doctor, which threatened to stain his family’s reputation. In the end, Dawson―a man in many ways representative of the country at this time―was felled by the very violence he vehemently opposed.

Roxana Robinson is the author of five previous novels, including Sparta and Cost; three collections of short stories; and the biography Georgia O’Keeffe: A Life. Her work has appeared in The Atlantic, The New Yorker, Harper’s Magazine, The Washington Post, The Wall Street Journal, and Vogue, among other publications. She has received fellowships from the NEA and the Guggenheim Foundation. She was president of the Authors Guild from 2014 to 2017. She teaches in the Hunter MFA program and divides her time among New York, Connecticut, and Maine.

Frank Dawson leaves all he knows in England to come to the United States to join the Confederacy in their fight against the Union in the Civil War. He becomes well known and mostly well liked in his community of Charleston, South Carolina. He becomes the editor of the Charleston News and Courier and his opinion is valued as the South tries to grow again after the ravages of the war.

It was a very difficult time in the country’s history as the South was dealing with the destruction the war wrought, the emancipation of the slaves which left them without their “free” labor source and the impact of various political forces on moving forward. Frank uses his platform to promote his liberal views which are, for the most part well received. He grows his family and all seems to be going well.

Then another paper opens with opposing views, more conservative views particularly when it comes to the freed slaves. Dawson finds his paper is losing subscribers and his business starts to wobble. He also finds himself embroiled in a feud with a neighbor. That neighbor, a doctor seems to have developed an obsession with the Dawson family nanny.

Ms. Robinson created the story from family diaries and historical records. It is a fascinating look at a tumultuous time in this country’s history. It does start a little slowly but it picks up and I found that I couldn’t put it down. Dawson is a rich and complicated man; his story is just one of the many immigrant tales that have built this country into what it is today. Each little piece in each little town and city has brought us to today.