A Day off the Farm: St. Ignatius, Montana

As I mentioned yesterday the hubby and I took a day trip off of the farm. We drove to St. Ignatius which is a little more than an hour away from our home in Superior. It’s on the Flathead Indian Reservation and home to the St. Ignatius Mission. We were driving out there because the hubby had been hearing about an Amish store for quite a while that had a great array of different products that he knew I’d enjoy.

It was a very grey day as we started out. Snow was in the forecast but it held off and by the time any precipitation appeared it was rain. I’ve mentioned many a time how magnificent the scenery is here in Montana and it’s a changeable environment. The mountains that cradle my little valley are very different from those that shadow the Flathead River. St. Ignatius is overseen by the Mission Mountains – a mountain range that seems to rise straight up from the flat of the valley. They appear as if from nothing – I stare at them in awe every time I get to see them. On this trip their tops were shrouded in the clouds but they were still amazing. 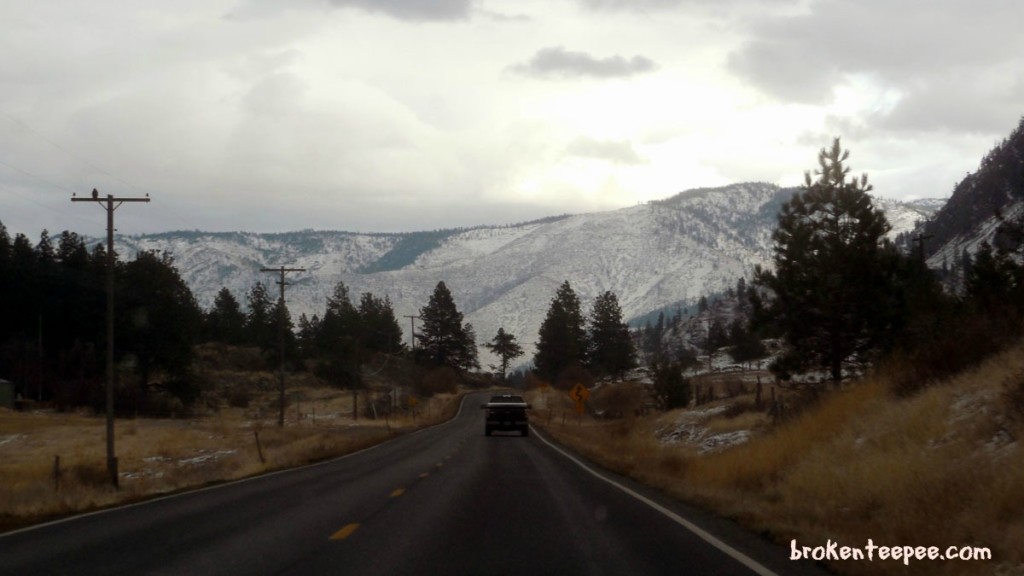 The drive was beautiful as well. I think we might have seen four cars the whole way over. The scenery is so amazing I can’t even read – it distracts me too much. There was far more snow here than we have. Actually we have none so any snow would have been far more snow! 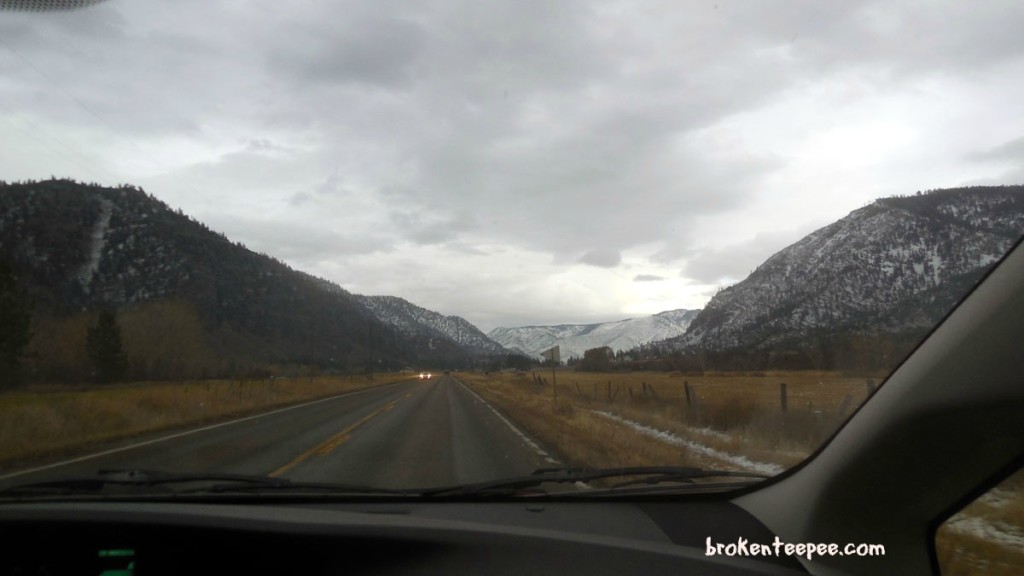 I have been totally bewitched by the mountains which is funny coming from someone who lived her whole life in the flats. I can’t imagine not living near them again – I somehow feel comforted by being surrounded by their greatness. If it had been a nicer day I might have had him stop for me to take better photos but the wind was blowing and it was miserably cold out there.

The town of St. Ignatius was small but inviting and again, had it been nicer we might have spent a little bit of time walking around. We are always a bit limited with our trips this time of year as we have to be back before dark to be able to put the goats back in the barn. The Mission building was the most imposing building in the town and from looking at pictures on line I’d like to get back to see it in person. 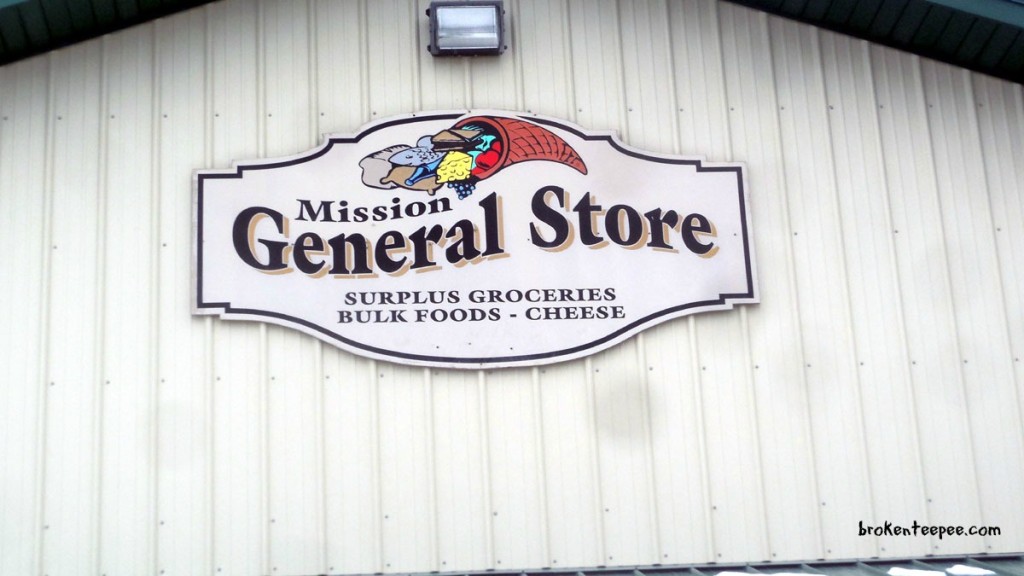 We then made it to our destination for the day, the Mission General Store. It was a pretty big store and I was rather like a kid in a candy shop. It was full of all kinds of fun things – including candy! My sweet tooth was very happy. I mostly picked up things for baking; I’m sure that comes as no big surprise. 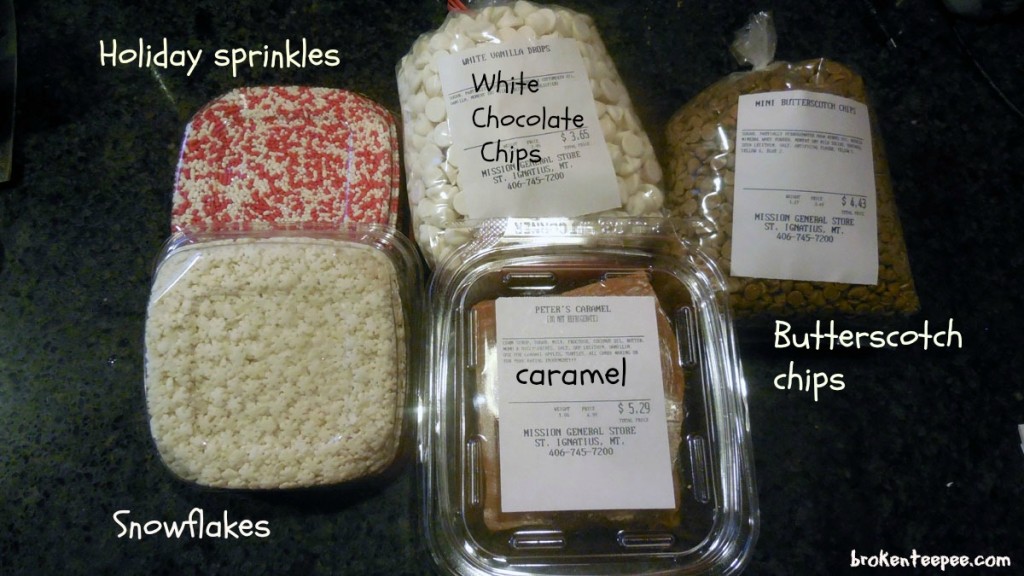 I found some fun decorations for cookies and cupcakes and some ingredients to play with for baking for the firemen. The hubby had some fun too; he has long wanted to grind grain to flour so I could bake him his bread from the freshly ground wheat. He found three types of wheat and grinder. That will be another post for another day as I’m baking the bread for our stuffing from what he grinds (as I type this!) 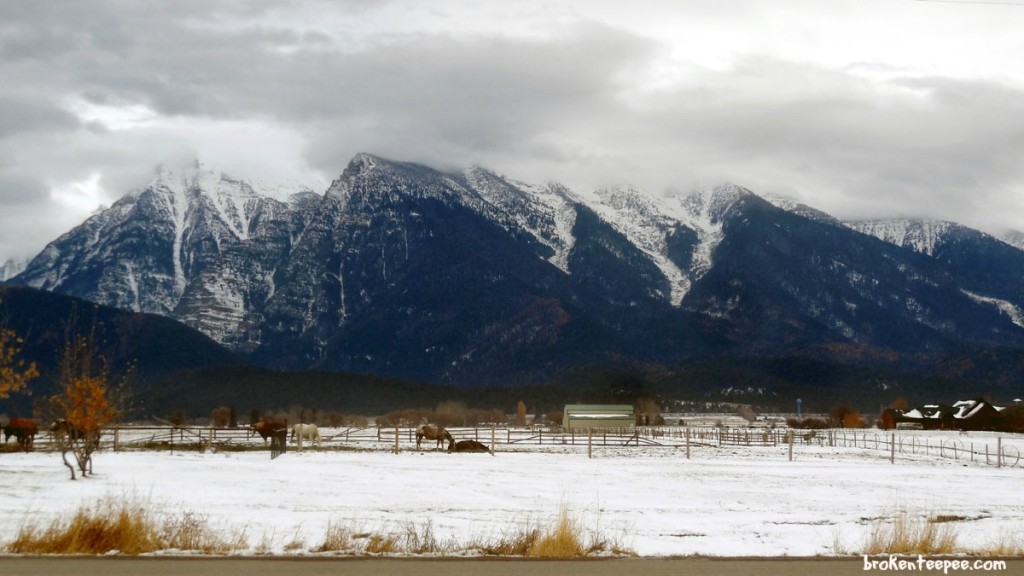 As we left the store I took one last photo. This is the view across from the store of those amazing Mission Mountains. I do wish the clouds hadn’t been obscuring them as they are magnificent in the sunlight. But you do get a sense of their glory. You can see what I mean when I write that they rise up out of nothing – no foothills – just straight up from the valley. If you ever visit Montana they are worth viewing.