Dreams of the Red Phoenix by Virginia Pye – Book Review

I received a free copy for my honest review. Book links are affiliate links 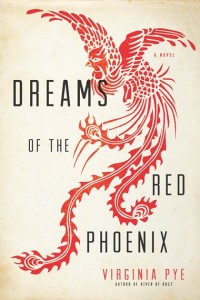 During the dangerous summer of 1937, a newly widowed American missionary finds herself and her teenage son caught up in the midst of a Japanese invasion of North China and the simultaneous rise of Communism. Meanwhile a charismatic Red Army officer requests her help and seems to have shared some surprising secret about her husband. Shirley must manage her grief even as she navigates between her desire to help the idealistic Chinese Reds fight the Japanese by serving as a nurse and the need to save both herself and her son by escaping the war-ravaged country before it’s too late.

Taking her own grandmother’s life as inspiration, Virginia Pye, author of the critically-acclaimed debut novel River of Dust, has written a stunning new novel of Americans in China on the cusp of World War II.

Virginia Pye holds an MFA from Sarah Lawrence College and has taught writing at the University of Pennsylvania and New York University. Her highly acclaimed first novel, River of Dust, is also a historical novel set in China. Her father, Lucian W. Pye, was born and raised in China and became an eminent political scientist and sinologist. Her grandfather, Watts O. Pye, was a founder of the Oberlin College-Shansi Program which took him and his wife, Gertrude, to China as the first returning missionaries after the Boxer Rebellion of 1900. Her grandmother stayed in China after the death of her husband and fled with her son—Virginia’s father—on the last ship out of China to the U.S. following Pearl Harbor. Pye currently divides her time between Richmond, VA, and Boston, MA.Author photo by Terry Brown.

Read an excerpt of Dreams of the Red Phoenix

I will be the first to admit that my knowledge of this period in history is limited at best. I know very little about the relationship between China and Japan other than it wasn’t friendly. This book is not lengthy at 288 pages yet it packs a lot of story between the covers.

World War II hasn’t begun yet in 1937 when this story begins but the start of the Japanese invasion of China is beginning. A young American woman, married to a preacher and living at an American Mission learns that her husband has died suddenly leaving her far from home with her son. She is bereft and unable to function while the world around her slowly starts to implode. Her son is growing into a young man and she barely notices. Circumstances force her out of her mourning stupor to face the facts of a possible war in her backyard.

What she learns about herself, her surroundings and the world as a whole will change her life forever and perhaps alter her in ways from which she can’t come back. I loved this character – she was a ball of confusion at the start but she grew into a strong woman through circumstance and a love for her adopted country.

Ms. Pye’s writing style is simple yet she really knows how to draw her reader into the story. She brings her characters alive from the protagonist to the smallest, seemingly insignificant character they all shine. I want to read this one again because I know I will find things I missed this first time around.