I received a free copy of Drift from TLC Book Tours for my honest review. 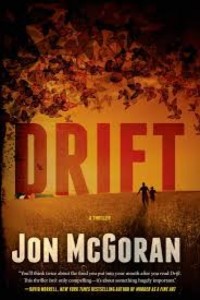 Publisher: Forge Books; 1 edition (July 9, 2013)
When Philadelphia narcotics detective Doyle Carrick loses his mother and step-father within weeks of each other, he gains a twenty-day suspension for unprofessional behavior and instructions to lay low at the unfamiliar house he’s inherited in rural Pennsylvania.
Feeling restless and out of place, Doyle is surprised to find himself falling for his new neighbor, Nola Watkins, who’s under pressure to sell her organic farm to a large and mysterious development company, and under siege from the genetically modified crops growing nearby. He’s more surprised to see high-powered drug dealers driving the small-town roads—dealers his bosses don’t want to hear about.
But when the drug bust Doyle’s been pushing for goes bad and the threats against Nola turn violent, Doyle begins to discover that what’s growing in the farmland around Philadelphia is much deadlier than anything he could have imagined . . .
Quick, clever, and terrifying, Jon McGoran’s Drift is a commercial thriller in the tradition of Nelson DeMille’s Plum Island.


JON McGORAN has written about food and sustainability for twenty years, as communication director at Weavers Way Co-op in Philadelphia, and now as editor at Grid magazine. During that time he has also been an advocate for urban agriculture, cooperative development and labeling of genetically engineered foods. He is a founding member of the Philadelphia Liars Club, a group of published authors dedicated to promotion, networking, and service work. In Drift, he combines his interest in the increasingly bizarre world of food today with his love of the thriller.
To connect with Jon, visit his website, jonmcgoran.com.

Drift is a very current suspense/thriller with all of the talk of GMOs in the news lately. Doyle Carrick is a Philadelphia cop who has a knack for finding both trouble and the bad guy. His mother and step father die within a relatively short period of time and he finds himself serving a 20 day suspension so he heads to their rural Pennsylvania home to try and settle their estates. What he finds is not the sleepy little town he expected.

I must admit that since I live on a small farm and my husband and I grow most of our own food this book greatly interested me – the hubby too. It’s now in his reading pile. Fortunately for us we don’t have any big farms residing next door. The story involves Doyle helping the neighbor, Nola who is trying to earn organic certification. (although that part of the plot is probably out of date as most small farms are no longer seeking Federal organic certification due to the ridiculous regulations that have been instituted.) A rare type of corn that she is growing sickens with a weird type of fungus and as she searches for why they answers she and Doyle find can kill them in more ways than one.

This was a page turner at points. Sometimes it did bog a bit in the science but given the overall topic a bit of science is to be expected. Overall it was a fast paced, very timely read. Some characters were a bit cardboard (local police chief, local bully, drug dealing bad guys) but the main ones like Doyle, Nola, Doyle’s cop friend, his parents are all well rounded and they are the ones that give the book its heart. I think Doyle is one of those characters that can carry a series and I hope to see him back fighting eco crime again.

You can see the Drift Tour Schedule

You can purchase Drift at Amazon.com

One lucky US reader will win a copy of Drift.  How do you win?  It’s easy – just hop on the Rafflecopter.  Good luck everyone.

Disclosure:  I received a free copy of Drift from TLC Book Tours for my honest review.  I received no compensation for this post.