I received a free copy of Echoes of Family from TLC Book Tours for my honest review. 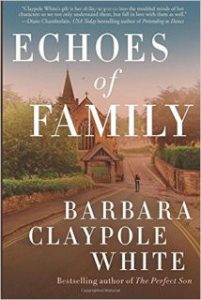 Sometimes the only way through darkness is to return to where it began.

Marianne Stokes fled England at seventeen, spiraling into the manic depression that would become her shadow. She left behind secrets, memories, and tragedy: one teen dead, and her first love, Gabriel, badly injured. Three decades later she’s finally found peace in the North Carolina recording studio she runs with her husband, Darius, and her almost-daughter, Jade…until another fatality propels her back across the ocean to confront the long-buried past.

In her picturesque childhood village, the first person she meets is the last person she wants to see again: Gabriel. Now the village vicar, he takes her in without question, and ripples of what if reverberate through both their hearts. As Marianne’s mind unravels, Jade and Darius track her down. Tempers clash when everyone tries to help, but only by finding the courage to face her illness can Marianne heal herself and her offbeat family.

A Brit living in North Carolina, Barbara Claypole White writes hopeful family drama with a healthy dose of mental illness. Her debut novel, The Unfinished Garden, won the 2013 Golden Quill Contest for Best First Book, and The In-Between Hour was chosen by the Southern Independent Booksellers Alliance as a Winter 2014 Okra Pick. Her third novel, The Perfect Son, was a semifinalist in the 2015 Goodreads Choice Awards for Best Fiction.

This was a very powerful book. I can’t say that I have personal experience with mental illness and what it can do to a person and a family. I do know that from the very first page I was drawn into this tale of a woman with bipolar disorder that wants nothing more than to live her life without hurting other people but as the first pages turn we learn that she has not only hurt someone she has basically repeated an action that sent her running from her original home in England.

Marianne was living in England and attempting to get her medications sorted for her bipolar when something horrible happens. I don’t want to spoil plot points but it sends her running to the US to get away from her action and her boyfriend. She ultimately settles in North Carolina with a man that loves her deeply and knows about her mental health challenges.  They adopt a young woman and Marianne sets up a group to help troubled girls. Her life is going well and all seems under control but we all know that the minute we think we are in charge and all is fine that is when Life decides to teach us otherwise. Life does this in a big way for Marianne and it sends her back to her beginnings to try and find answers but sometimes there are just more questions.

This is a very richly developed book with a profound story and strong group of well defined characters. It was very hard to put down and to be honest I just about read it in two long sittings. I found myself quite drawn into the lives of Marianne, Darius, Jade and Gabriel and didn’t want to leave their complex world. This is my second five star book in a row and that is just a delightful gift for a reader. This is another one I will keep for a second read when I have the time. I am sure there is much to be gleaned in a second, more paced reading.

One lucky reader (US/Can) will win a copy of Echoes of Family. Just enter as many ways as you would like on the Gleam widget below. Full rules are on the widget. Good luck everyone.