I am a big fan of Biblical fiction so I was happy to accept a copy of Eden by Brennan McPherson from Historical Fiction Virtual Book Tours at no charge for my honest review. 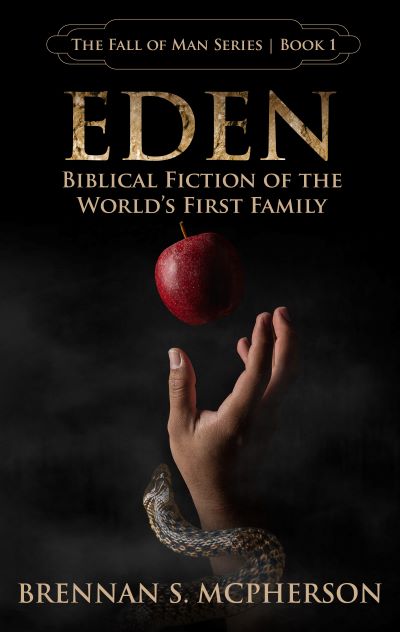 “You want me to tell of how I broke the world.”

It’s the year 641 since humanity was formed in Eden, and after Eve passes away, Adam is the only man left on earth who remembers everything from the beginning of the world.

When Enoch, God’s newly appointed prophet, decides to collect the stories of the faithful from previous generations, he finds Adam in desperate need to confess the dark secrets he’s held onto for too long.

Beside a slowly burning bonfire in the dead of night, Adam tells his story in searing detail. From the beginning of everything, to how he broke the world, shattered Eve’s heart, and watched his family crumble.

Will Enoch uncover what led so many of Adam’s children away from God? And will Adam find the redemption and forgiveness he longs for?

Eden is a fictional retelling of the Bible story of the Garden of Eden, the creation of man, the addition of his helpmate and their fall from grace. Mr. McPherson tells his reader from the start that his tale is not all sweetness and light. He presents Adam and Eve in the Garden as students as Father teaches them all they need to know. There is only only one rule they need to remember – do not eat from one tree. But as we all know, from the tree they eat. This action finds Adam and Eve evicted from Eden and sent out into a world where they will have to fend for themselves. It does not prove easy.

As they find a place to settle down and use the skills they were taught in Eden we soon find that Adam and Eve had a relationship much like any; it was not all sunshine and roses. Adam could be a little obtuse and Eve was less than pleasant at times. Soon those darling boys, Cain and Able arrive and their two divergent personalities lead to parenting challenges.

One thing remains stable though, Adam’s annual visit to visit God back at the entrance to Eden. Each year hoping to find himself back in God’s grace but each year returning to try again. The story is told to the prophet Enoch in Adam’s voice.

Eden is a story of relationships; man and woman, parent and child, disciple and God. Each seperate and all together as they they are all interwoven in this origin tale. It brings Adam and Eve to very real, very human life with all of the foibles that humans are known for. Eden does bring alive the somewhat stilted Biblical version of the expulsion story. I did go back and reread it and again. Mr. McPherson makes the tale more real.

This was a really interesting book and the story was a good one. Even for a skeptic like me.