What book have I finished today? Elusive Dawn by Gabrielle Wills. I would like to thank Virtual Author Book Tours for offering me the opportunity to read this novel of wealth and privilege during World War I. I appreciate their sending me the book at no cost. As always, all opinions are my own. 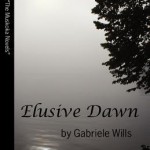 Publisher : Mindshadows,  June 28, 2012
Category: Historical Fiction, WWI
Tour Dates: February, 2013
Available in: Print and ebook, 555 pages
It happened slowly at first. Thread by thread, the fabric of privilege and complacency enveloping the Wyndham family began to unravel. A carefree summer at their island house, disrupted by the arrival of long lost kin, ended in tragedy, betrayal, and war.
Now, in the compelling sequel to the acclaimed epic, The Summer Before The Storm, Ria and her friends find themselves at the mercy of forces beyond their control.
It’s late summer, 1916. While some members of the Wyndham family revel in the last resplendent days of the season at their Muskoka cottage, others continue to be drawn inexorably into the “Great War”, going from a world of misty sunrises across a tranquil lake to deadly moonlight bombing raids, festering trenches, and visceral terror.
For Ria, too many things have happened to hope that life would ever return to normal, that innocence could be regained. Caught in the vortex of turbulent events and emotions, she abandons the relative safety of the sidelines in Britain for the nightmare of France.
Her fate as an ambulance driver remains entwined with that of  her summer friends, all bound by a sense of duty. Living in the shadows of fear and danger awakens the urgency to grasp life, to live more immediately, more passionately amid the enormity of unprecedented death. Together, their lives weave a tale of liberation and loss, evolution and redemption. Those who survive this cataclysmic time are forever changed, like Canada itself.

The author of five highly acclaimed historical novels, Gabriele loves to recreate an era in which she can immerse herself (and readers), by weaving compelling stories around meticulously researched facts. Her characters are best friends, whom others are now calling “cherished friends”.
With degrees in the social sciences and education, Gabriele has had a varied career as an educator, literacy coordinator, and website designer, and has been an active community volunteer, particularly in heritage preservation. But writing fiction has always been her passion. Her first short story appeared in the Canadian Authors Association Winners’ Circle 5 Anthology. In 2001, she produced an award-nominated feature on CBC Radio’s “Outfront”.
Born in Germany, Gabriele emigrated to Canada as a young child. She grew up in Lindsay, Ontario, enjoyed several years in Ottawa, and currently resides in Guelph with her husband. She is the proud mother of an accomplished daughter, with whom she is collaborating on an historical YA novel. Visit her at Mindshadows.com for more information.
Gabriele’s Facebook Page:  https://www.facebook.com/GabrieleWills
Gabriele on Twitter: https://twitter.com/GabrieleWills

Elusive Dawn is the second book of the Muskoka trilogy and it picks up where The Summer Before the Storm left off – Ria had just received some devastating news about her beloved Chas and WWI was disrupting the privileged lives that the Wyndhams and Thortons had come to cherish.

Most of this book takes place away from the lake the families love so much. Most of the action occurs either in England or in France and it is the War and its horrors that are the focus of this piece of the series. And horrors there are. Ms. Wills does not spare her reader from the battles and the wounded but she does not write anything that is unnecessary or exploitative. War is hell and to write a novel involving soldiers, doctors and ambulance drivers there is no getting around the violence that it engenders.

Ria has left her family in Canada and is now a member of the WATS ambulance corps. She is unable to forgive Chas his indiscretion and is running away from her life. She does find a strong group of friends in the corp and finds she has much to contribute the war effort. She refuses to write or talk to Chas and this drove me crazy – until I remembered how YOUNG she was. I kept viewing her actions through my very much older self and once I remembered what it was like to be 20 it made sense again. I won’t spoil the story but to say that War is a great healer as well as a great divider.

The book mostly focuses on Ria and Chas’s story but does take time for the many, many, many other characters in the Muskoka family. In fact my one complaint is that they all seemed to be reintroduced within the first chapter and I had a hard time remembering who was who and who was related to who how. It had been a while since I had read the first book and throwing them all at me at once was a bit daunting. I finally sorted them all out, along with the new ones and was able to stop turning back to figure out who belonged where. Barring that confusion the book would have gotten a 5.

Ms. Wills has a remarkable way of dropping her characters into the history of the time seamlessly. The book is historically accurate but the reader never feels as if they are reading a boring history textbook. She truly brings history alive through her descriptions and her characters. I didn’t want the story to end and this was not a short, easy read. I am very much looking forward to the finale of this exciting trilogy.

You can see the Elusive Dawn Tour Schedule

The Summer Before the Storm by Gabrielle Wills

The California Wife by Kristin Harnisch