The Enemies of Versailles by Sally Christie – Book Review

I received a free copy of The Enemies of Versailles from Historical Fiction Virtual Book Tours for my honest opinion. 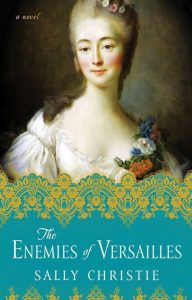 In the final installment of Sally Christie’s “tantalizing” (New York Daily News) Mistresses of Versailles trilogy, Jeanne Becu, a woman of astounding beauty but humble birth, works her way from the grimy back streets of Paris to the palace of Versailles, where the aging King Louis XV has become a jaded and bitter old philanderer. Jeanne bursts into his life and, as the Comtesse du Barry, quickly becomes his official mistress.

“That beastly bourgeois Pompadour was one thing; a common prostitute is quite another kettle of fish.”

After decades of suffering the King’s endless stream of Royal Favorites, the princesses of the Court have reached a breaking point. Horrified that he would bring the lowborn Comtesse du Barry into the hallowed halls of Versailles, Louis XV’s daughters, led by the indomitable Madame Adelaide, vow eternal enmity and enlist the young dauphiness Marie Antoinette in their fight against the new mistress. But as tensions rise and the French Revolution draws closer, a prostitute in the palace soon becomes the least of the nobility’s concerns.

Told in Christie’s witty and engaging style, the final book in The Mistresses of Versailles trilogy will delight and entrance fans as it once again brings to life the sumptuous and cruel world of eighteenth century Versailles, and France as it approaches irrevocable change.

Sally Christie is the author of The Sisters of Versailles and The Rivals of Versailles. She was born in England and grew up around the world, attending eight schools in three different languages. She spent most of her career working in international development and currently lives in Toronto.

Visit SallyChristieAuthor.com to find out more about Sally and the Mistresses of Versailles trilogy.

You can also find her on Facebook, Goodreads, and Amazon.

This is the third and final volume in the Mistresses of Versailles trilogy. The series has focused on the court of Louis XV and his rather extensive list of ladies. This chapter closes out his life with his last mistress, the woman who history knows as the Comtesse du Barry. She was far from noble, in fact her early life was very hard. Her only asset was her amazing beauty and she used it as soon as she could to get out of the lower class – although she became a prostitute for lack of a better word. While living with the Comte du Barry she catches the eye of the king who was a bit afloat after the loss of his last mistress. Our heroine with her quick wit and great beauty soon is all the king can think about.

She is not at all popular with the nobility in place despite the fact that she makes the king happy. Nor is she welcomed by the extremely uptight royal sisters. They must of course, remain sororal at all times. The eldest of the sisters, Adelaide plays a significant role in this tale as she tries to steer her father down a more righteous path but he is not exactly a man that would choose to ignore his earthly erm, pleasures.

I found this trip back to the court of Louis XV to be time well spent at least for the pages that were inhabited by the delightful Comtesse – for her life before and after her rise to the heights of power. When the pages were driven by Adelaide I wanted to choke her. I really do not like this character and that has held firm through all three books. That is a testament to Ms. Christie and she must have been one obnoxious woman. Not Ms. Christie but Madame Adelaide. The book ends at the height of the French Revolution so it does not end happy – but I’m not spoiling any tales as all of this is history. The ending stayed with me, I will note that.

There are two giveaways; I’m hosting one myself for a copy of the book and there is a tour wide giveaway. Feel free to enter one or both!

First up, mine – one lucky US reader will win a copy of The Enemies of Versailles. Just enter as many ways as you would like on the Gleam widget below. Full rules are on the widget.

The Enemies of Versailles

Next – the tour wide giveaway:

Five copies of The Enemies of Versailles are up for grabs during the blog tour! To enter, please see the Gleam form below.

– Giveaway ends at 11:59pm EST on March 31st. You must be 18 or older to enter.
– Giveaway is open to residents in the US only.
– Only one entry per household.
– All giveaway entrants agree to be honest and not cheat the systems; any suspect of fraud is decided upon by blog/site owner and the sponsor, and entrants may be disqualified at our discretion.
– Winner has 48 hours to claim prize or new winner is chosen.

YOU CAN READ MY REVIEW OF THE RIVALS OF VERSAILLES

YOU CAN READ MY REVIEW OF THE SISTERS OF VERSAILLES

YOU CAN PURCHASE THE RIVALS OF VERSAILLES ON AMAZON.COM

YOU CAN PURCHASE THE SISTERS OF VERSAILLES ON AMAZON.COM