I have been reading Kristy Woodson Harvey books for several years now so I was very happy when she offered to send me to me her latest, Feels Like Falling I was very happy to accept the book at no charge for my honest review. 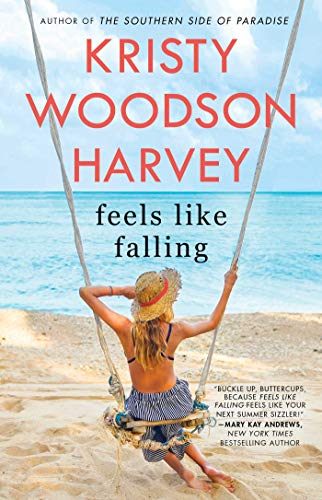 It’s summertime on the North Carolina coast and the livin’ is easy.

Unless, that is, you’ve just lost your mother to cancer, your sister to her extremist husband, and your husband to his executive assistant. Meet Gray Howard. Right when Gray could use a serious infusion of good karma in her life, she inadvertently gets a stranger, Diana Harrington, fired from her job at the local pharmacy.

Diana Harrington’s summer isn’t off to the greatest start either: Hours before losing her job, she broke up with her boyfriend and moved out of their shared house with only a worn-out Impala for a bed. Lucky for her, Gray has an empty guest house and a very guilty conscience.

With Gray’s kindness, Diana’s tide begins to turn. But when her first love returns, every secret from her past seems to resurface all at once. And, as Gray begins to blaze a new trail, she discovers, with Diana’s help, that what she envisioned as her perfect life may not be what she wants at all.

In her warmest, wisest novel yet, Kristy Woodson Harvey delivers a discerning portrait of modern womanhood through two vastly different lenses. Feels Like Falling is a beach bag essential for Harvey fans—and for a new generation of readers.

Kristy Woodson Harvey is the bestselling author of six novels, including The Southern Side of Paradise, Slightly South of Simple, and the forthcoming Feels Like Falling. A Phi Beta Kappa, summa cum laude graduate of the University of North Carolina at Chapel Hill’s school of journalism, her writing has appeared in numerous online and print publications including Southern Living, Traditional Home, USA TODAY, Domino, and O. Henry Magazine. Kristy is the winner of the Lucy Bramlette Patterson Award for Excellence in Creative Writing and a finalist for the Southern Book Prize. Her work has been optioned for film, and her books have received numerous accolades including Southern Living’s Most Anticipated Beach Reads, Parade’s Big Fiction Reads, and Entertainment Weekly’s Spring Reading Picks. She blogs with her mom Beth Woodson on Design Chic, and loves connecting with fans on KristyWoodsonHarvey.com. She lives on the North Carolina coast with her husband and son where she is working on her next novel.

Kristy Woodson Harvey’s books are perfect beach reads. They are always populated with engaging characters who are navigating relationships of all kinds. Feels Like Falling introduces the reader to two women – Gray Howard and Diana Harrington. Both are dealing with man problems but they are very far apart in how those problems will impact their lives.

Gray finds herself facing divorce in the most stereotypical fashion; her husband has left her for his much younger assistant. She is the one who has built her business to the the success it is, even employing her rat soon to be ex but perhaps her attention to it took away from her attention to him. But no matter what she is not going to let him destroy her business or take her son away.

Diana has a far less comfortable lifestyle; in fact her latest shlub of a boyfriend has gambled away her savings and thanks to complaints from Gray she has lost her job and has been reduced to living in her car. But a fortunate encounter has her working for Gray even though she swore she would never be anyone’s maid again. But it’s far more than just cleaning the house and she has fallen in love with Gray’s little boy.

The book is a celebration of women and their friendships. Through sadness and defeat it will be the friends in your life that will pull you through – whether they are the women you have known forever or the new friends that come along when you need them. Not to discount the men in their lives because there is plenty of romance going on in this book, but it is the love between the women that holds the tale together.

I was pretty much captivated from the first pages and read the book in one afternoon. It was a perfect book for a cold and rainy day. I was able to spend it instead on the beach with the women of Feels Like Falling instead of having to face looking out my windows at a gloomy day. This has been my favorite of all the books I have read so far by Ms. Harvey. 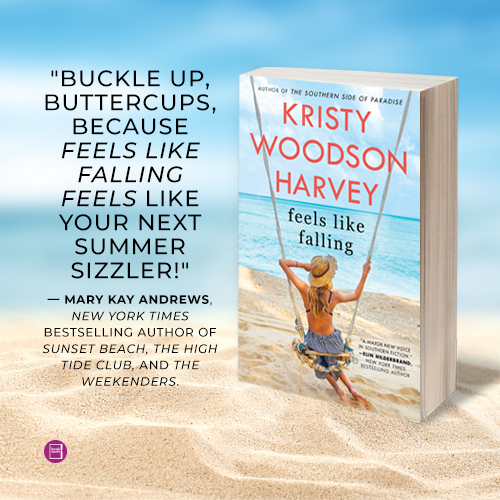