This is my second Shinobi Mystery book. I was happy to be sent a copy at no charge. When the tour was announced from TLC Book Tours I was all over it because I had enjoyed the first book so much. 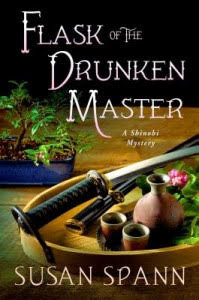 About Flask of the Drunken Master:

August 1565: When a rival artisan turns up dead outside Ginjiro’s brewery, and all the evidence implicates the brewer, master ninja Hiro Hattori and Portuguese Jesuit Father Mateo must find the killer before the magistrate executes Ginjiro and seizes the brewery, leaving his wife and daughter destitute. A missing merchant, a vicious debt collector, and a female moneylender join Ginjiro and the victim’s spendthrift son on the suspect list. But with Kyoto on alert in the wake of the shogun’s recent death, a rival shinobi on the prowl, and samurai threatening Hiro and Father Mateo at every turn, Ginjiro’s life is not the only one in danger.

Will Hiro and Father Mateo unravel the clues in time to save Ginjiro’s life, or will the shadows gathering over Kyoto consume the detectives as well as the brewer?

This is the third in the Shinobi series. I didn’t have the opportunity to read the first book in the series,  Claws of the Cat but I did read Blade of the Samurai. The two main characters Hiro Hattori and Father Mateo are very well drawn and I enjoy their interactions. The two of them are starting to get a reputation now for solving murders; Hiro is not sure about this since his main focus needs to be protecting Father Mateo. He has been hired to make sure that the priest stays alive.

In this volume Hiro and Father Mateo come upon Ginjiro, the sake bar owner they both know being arrested for the murder of another sake brewer. Ginjiro’s daughter asks Hiro to find the evidence that will clear her father. She is sure he is innocent. Hiro agrees because Ginjiro did him a favor when he was investigating last year. Hiro finds many people who have motive to kill the brewer – including Ginjiro – and he works slowly and methodically to find the killer.

This all happens while the city around them swirls with rumors about the new Shogun. Will he stay in power or will there be a threat to it. Samurai are on every corner asking for papers making it hard for Hiro and Father Mateo to move about – especially since Father Mateo is a foreigner.

I enjoyed the book. The relationship between the two men is very refreshing and it grows deeper with each book. The setting of feudal Japan is one not used very often and that makes it enticing. Ms. Spann brings the period to life in quiet ways. It’s not a suspenseful murder mystery but it’s one that was engaging from start to finish.