I was very excited to be contacted by author Gwendolyn Womack to review her latest book, The Fortune Teller. The publisher sent me a copy at no charge for my honest opinion. I had enjoyed her first book, The Memory Painter. 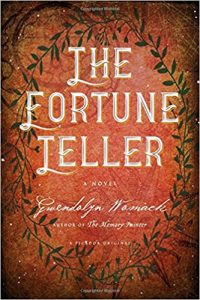 About The Fortune Teller:

Semele Cavnow appraises antiquities for an exclusive Manhattan auction house, deciphering ancient texts―and when she discovers a manuscript written in the time of Cleopatra, she knows it will be the find of her career. Its author tells the story of a priceless tarot deck, now lost to history, but as Semele delves further, she realizes the manuscript is more than it seems. Both a memoir and a prophecy, it appears to be the work of a powerful seer, describing devastating wars and natural disasters in detail thousands of years before they occurred.

The more she reads, the more the manuscript begins to affect Semele’s life. But what happened to the tarot deck? As the mystery of her connection to its story deepens, Semele can’t shake the feeling that she’s being followed. Only one person can help her make sense of it all: her client, Theo Bossard. Yet Theo is arrogant and elusive, concealing secrets of his own, and there’s more to Semele’s desire to speak with him than she would like to admit. Can Semele even trust him?

The auction date is swiftly approaching, and someone wants to interfere―someone who knows the cards exist, and that the Bossard manuscript is tied to her. Semele realizes it’s up to her to stop them: the manuscript holds the key to a two-thousand-year-old secret, a secret someone will do anything to possess.

Gwendolyn Womack began writing plays in college and majored in Theatre at the University of Alaska, Fairbanks. She received an MFA in Directing Theatre and Film from California Institute of the Arts and currently lives in Los Angeles with her family. The Memory Painter is her first novel.

This is my second book by Ms. Womack. Her books combine present and past with a bit of mysticism which makes them very interesting to read. In the case of The Fortune Teller the reader is taken back almost to the dawn of history through a set of Tarot that are traced through time.

Semele is a young woman who is an expert on ancient manuscripts and she is sent to Switzerland to inventory the library of a recently deceased man who owns some fine pieces from ancient history. As she is finishing up she discovers a private diary of a woman who seems to be detailing a future she could not have known. In reading the book Semele comes across her name. It’s almost as if the diary is speaking to her.

As Semele reads/translates the diary she finds herself lost in the story of the woman who wrote it. She also finds herself being followed. The owner of the manuscript is an intriguing man and is very knowing and concerned for her safety. As her life starts to fall apart; her work is taken from her, she has issues with her mother and her boyfriend doesn’t understand her need to finish the translation of the diary.  She is driven to find out how it ends but someone is trying to  control her from outside. She and the owner of the diary work together to sort it all out.

I find I really can’t do justice to this book without giving things away. The book starts in the time of the Pharoahs and dips into history at various points in time. The book rips right along at a good pace and the plot is fascinating. I was caught by surprised at the end and I just love when that happens with a book. The characters – well at least the main ones are well developed and three dimensional. Some of the ancillary characters are a little less fleshed out but they don’t play big roles. It was a fun and entertaining read.