I know I keep writing no more WWII books and yet here I am again.  Fragments of Light by Michele Phoenix takes place in two time periods and yes, one of them is during the second World War. I thank TLC Book Tours for sending me a copy at no charge for my honest review. 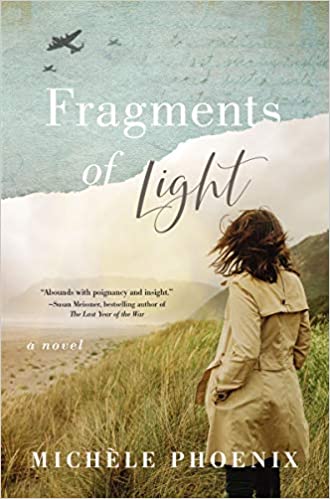 About Fragments of Light:

An impossible decision in the chaos of D-Day. Ripples that cascade seventy-five years into the present. And two lives transformed by the tenuous resolve to reach out of the darkness toward fragments of light.

Cancer stole everything from Ceelie—her peace of mind, her self-image, perhaps even her twenty-three-year marriage to her college sweetheart, Nate. Without the support of Darlene, her quirky elderly friend, she may not have been able to endure so much loss.

So when Darlene’s prognosis turns dire, Ceelie can’t refuse her seemingly impossible request—to find a WWII paratrooper named Cal, the father who disappeared when Darlene was an infant, leaving a lifetime of desolation in his wake.

The search that begins in the farmlands of Missouri eventually leads Ceelie to a small town in Normandy, where she uncovers the harrowing tale of the hero who dropped off-target into occupied France.

Alternating between Cal’s D-Day rescue by two young French sisters and Ceelie’s present-day journey through trial and heartbreak, Fragments of Light poses a timeless question: When life becomes unbearable, will you press toward the light or let the darkness win?

Born in France to a Canadian father and an American mother, Michèle Phoenix is a consultant, writer and speaker with a heart for Third Culture Kids. She taught for 20 years at Black Forest Academy (Germany) before launching her own advocacy venture under Global Outreach Mission. Michèle travels globally to consult and teach on topics related to this unique people group. She loves good conversations, mischievous students, Marvel movies and paths to healing.

Fragments of Light is a tale of a strong friendship and a weak marriage. Ceelie has just gone through the worst that breast cancer could throw at her and while her husband supported her it was her friend Darlene that really was her support system having been through it herself. But after Ceelie finally gets back on her feet after reconstruction she learns that Darlene’s cancer has returned and is terminal. Her friend asks her to help her find the father she never knew.

The book is told in two timelines; during the D-Day invasion of Nazi occupied France and in the modern day. During the invasion we meet two soldiers; Buck and Cal. Cal is rescued by two young French girls after a bad parachute jump during the invasion. He is injured and they help hide him and do what they can to get him fixed up. Buck finds them all later and is a bit of wild card – he has no nuance at all and is a bit of ass if you want my opinion.

Darlene’s father just up and left and she never want to know anything about him or to even talk about him but now that she is dying she feels like she should resolve her issues and try and find him. To this end she gives Ceelie all the information she has and they start off together to try and find him.

This was a fascinating read about men of war who are sent to do battle but often forget their humanity. It’s a tale of love, loss and redemption but not for all. In that it’s the story of life because life is messy and far from linear. The tales told in both timelines are compelling as they rush towards each other and a conclusion that is satisfying if not perfect.