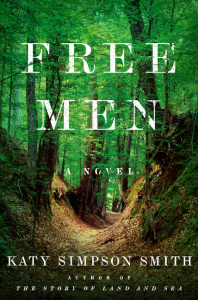 In 1788 three men converge in the southern woods of what is now Alabama: Cat, an emotionally scarred white man; Bob, a garrulous black man fleeing slavery; and Istillicha, who seeks retribution after being edged out of his Creek town’s leadership.

In the few days they spend together, the makeshift trio commits a shocking murder that soon has the forces of the law bearing down upon them. Sent to pick up their trail, a probing French tracker named Le Clerc must decide which has a greater claim: swift justice or his own curiosity about how three such disparate, desperate men could act in unison.

Katy Simpson Smith skillfully brings into focus men whose lives are both catastrophic and full of hope—and illuminates the beating heart of a new America. A captivating exploration of how four men grapple with the importance of family, the stain of guilt, and the competing forces of power, love, race, and freedom.

Katy Simpson Smith is the author of a study of early American motherhood, We Have Raised All of You: Motherhood in the South, 1750-1835, and a novel,The Story of Land and Sea. She lives in New Orleans.

This is my second book by Ms. Stimpson Smith. I read her debut, The Story of Land and Sea and just loved it. Like that book, Free Men is complicated, messy and not at all easy to read. But you are richly rewarded for diving in to this beautifully bound novel. I love when a publisher takes the time to present a book rather than just printing it up and shoving it out the door.

This is the story of 4 men and they each tell their tales in their own voice. That is part of the brilliance of the book – each character has a very distinct voice and that does not waver. Three of the men Cal, a white man, Bob, a slave and Istillicha, a Creek Indian are running from separate yet somehow similar problems. They come together  through force and murder, not by choice.

The fourth man is LeClerc and he is, if not the law, the man that is charged with catching them and bringing them to justice – which really means killing them. But he is a man of curiosity and he wants to know the men’s histories and why they did what they did. He is a man that studies everything around him and writes it all down in “reports.” So while he will do what he is charged to do, he will do it his way.

Free Men is a delightfully long book, rich in character and long on development. It’s actually based in fact and that, to me always makes a novel more interesting. Ms. Simpson Smith has a way with words – I wrote this in my review for her first book – that just draws you into the world of the characters until you just don’t feel like you are reading any more. You are immersed in the world and walking, eating and living with the characters. I was drawn in from the first sentence. There is a lot of ugly in the book; it was not a graceful time in this country’s history particularly for people of color. I will keep this one on my “to read again” shelf because I do believe it deserves a second go round. Now to just find the time to do so.