I have long been a fan of Donna Russo Morin’s Books; The last books of hers I thoroughly enjoyed reading were Portrait of a Conspiracy and The Competition – her Da Vinci Disciples series. Historical Fiction Virtual Book Tours sent a copy at no charge for my honest review. 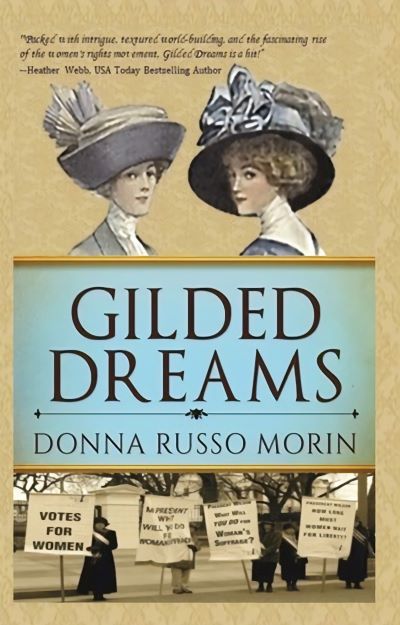 From the bestselling author of GILDED SUMMERS comes a powerful novel of the last eight years of the American Women’s fight for suffrage.

The battle for the vote is on fire in America. The powerful and rich women of Newport, Rhode Island, are not only some of the most involved suffragettes, their wealth – especially that of the indomitable Alva Vanderbilt Belmont – nearly single-handedly funded the major suffrage parties. Yet they have been left out of history, tossed aside as mere socialites. In GILDED DREAMS, they reclaim their rightful place in history.

Pearl and Ginevra (GILDED SUMMERS) are two of its most ardent warriors. College graduates, professional women, wives, and mothers, these progressive women have fought their way through some of life’s harshest challenges, yet they survived, yet they thrive. Now they set their sights on the vote, the epitome of all they have struggled for, the embodiment of their dreams.

From the sinking of the Titanic, through World War 1, Pearl and Ginevra are once more put to the test as they fight against politics, outdated beliefs, and the most cutting opponent of all… other women. Yet they will not rest until their voices are heard, until they – and all the women of America – are allowed to cast their vote. But to gain it, they must overcome yet more obstacles, some that put their very lives in danger.

An emotional and empowering journey, GILDED DREAMS is a historical, action-packed love letter to the women who fought so hard for all women who stand on the shoulders of their triumph.

You can purchase Gilded Dreams at Kona Bay Books

Donna Russo Morin is an award-winning historical fiction author. Donna has dabbled as a model and actor, working on Showtime’s Brotherhood and Martin Scorsese’s The Departed. Branching out with her storytelling skills, Donna is now a screenwriter. A graduate of the University of Rhode Island, Donna lives on the south shore of Rhode Island close to the ocean she loves so very much. She is the proud mother of two sons, Devon and Dylan, her greatest works in progress.

Gilded Dreams is the second book featuring two friends, Pearl and Ginevra and their two different worlds. They have been through so much together – I did not have the honor of reading Gilded Summers but Ms. Russo Morin does an excellent job of weaving in the salient details so that this book stands alone quite well. As I always note though, books in a series are always richer for reading all the books.

This book takes place during the last 8 years of the fight for women’s suffrage but it begins with the sinking of the Titanic. The impact of that tragedy on the residents of Newport, RI, was truly devastating as many of the well to do had their “cottages” there. The scenes surrounding that event are horrifying and heartrending. The ramifications for Pearl as she loses her family help to showcase some of the reasons that women were fighting so hard for their rights, culminating in the right to vote so as to be able to install legislators to promote their causes. (No comment on how far we have come and how far we still have to go.)

Both women are very compelling as characters each representing a very different demographic in the fight for women’s rights. Pearl is a child of privilege and Ginevra is an immigrant who has worked hard, gotten an education and overcome some trauma to find herself happily married and best friends with Pearl. The hows and whys of that friendship are detailed in Gilded Summers.

As Ginevra supports Pearl through her loss the two join a suffragette group and work to recruit others to the cause. This effort is supported by their husbands but not always by the other people in their social circles. As the fight for the right to vote for women reaches a boiling point these two friends are right in the midst of the battle. People against their efforts resort to deeply personal attacks against them but I’m not giving any spoilers by telling you that women are given the right to vote. The celebration of the ratification of the 19th amendment is approaching; the 90th anniversary is 8/18/20.

It’s thanks to the real women who inspired the fictional characters and the actual suffragettes featured that women are no longer just their father’s daughter or their husband’s wife. A woman can own property in her own right and she can vote. The fight was a hard one and reading out the efforts to stop it is both discouraging and horrifying. These women were beaten, jailed and treated like less than just for seeking to better themselves. Ms. Russo Morin brings the period to vivid life with two very rich characters to tell her tale. It’s a page turner of a book and a story that should be read and needs to be told for so many are unaware the battle. Not to mention there is still a long way to go.

During the Blog Tour, we are giving away a copy of the book + a painting of a scene from the book painted by the author! To enter, please use the Gleam form below.

Giveaway is open to US residents only and on September 4th. You must be 18 or older to enter. 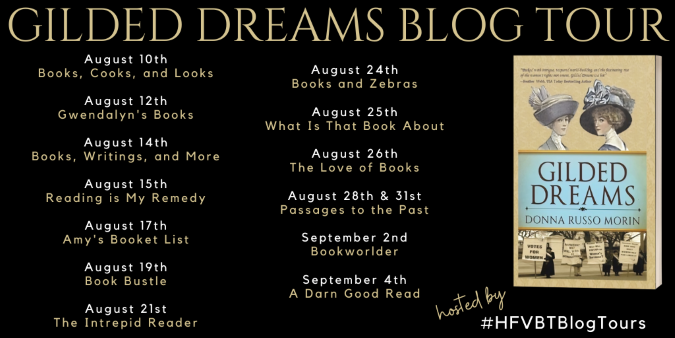