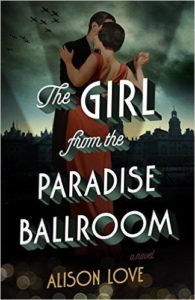 An epic love story featuring an Italian singer and a British dancer, set against the backdrop of war-torn England.

The first meeting between Antonio and Olivia at the Paradise Ballroom is brief, but electric.

Years later, on the dawn of World War II, when struggling Italian singer Antonio meets the wife of his wealthy new patron, he recognizes her instantly: it is Olivia, the captivating dance hostess he once encountered in the seedy Paradise Ballroom. Olivia fears Antonio will betray the secrets of her past, but little by little they are drawn together, outsiders in a glittering world to which they do not belong. At last, with conflict looming across Europe, the attraction between them becomes impossible to resist–but when Italy declares war on England, the impact threatens to separate them forever.

The Girl from the Paradise Ballroom is a story of forbidden love and family loyalties amid the most devastating war in human history.

ALISON LOVE is the author of the historical novels Mallingford and Serafina. Her short stories have appeared in numerous magazines and anthologies, and in 2013 her story Sophie Stops the Clock was shortlisted for the Bristol Short Story Prize. Alison has worked in the theater, television, and public relations. The Girl from the Paradise Ballroom is her American fiction debut.

One lucky US reader will win a copy of The Girl from the Paradise Ballroom. Just enter as may ways as you would like on the Gleam widget below. Full rules are on the widget. Good luck everyone.

The Girl from the Paradise Ballroom