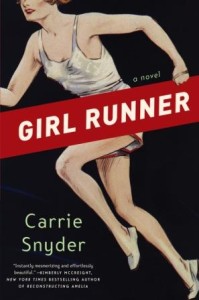 An unforgettable novel about competition, ambition, and a woman’s struggle to earn a place in a man’s world, Girl Runner is the story of 1928 Olympic gold medalist Aganetha Smart. Will Aganetha’s undeniable talent help her to outrun the social conventions of her time, or the burden of her family’s secrets?

As a young runner, Aganetha Smart defied everyone’s expectations to win a gold medal for Canada in the 1928 Olympics. It was a revolutionary victory, because these were the first Games in which women could compete in track events—and they did so despite opposition. But now Aganetha is in a nursing home, and nobody realizes that the frail centenarian was once a bold pioneer.

When two young strangers appear asking to interview Aganetha for their documentary about female athletes, she readily agrees. Despite her frailty, she yearns for adventure and escape, and though her achievement may have been forgotten by history, her memories of chasing gold in Amsterdam remain sharp. But that triumph is only one thread in the rich tapestry of her life. Her remarkable story is colored by tragedy as well as joy, and as much as Aganetha tries, she cannot outrun her past.

Part historical page-turner, part contemporary mystery, Girl Runner peels back the layers of time to reveal how Aganetha’s amazing gift helped her break away from a family haunted by betrayals and sorrow. But as the pieces of her life take shape, it becomes clear that the power of blood ties does not diminish through the years, and that these filmmakers may not be who they claim to be. . . .

I will begin by writing that this could have been so much more than it was. Girl Runner is a fictional story based on the first team of female runners Canada sent to the Amsterdam Olympics – the first year women were allowed to participate. Aganetha Smart won the gold medal in that seminal race and we meet her in the 104th year of her life. She is living in a nursing home and wearing the effects of her age – one of which is a memory that comes and goes. She has outlived her family and has little to spark her days until she has some visitors that claim to be making a movie about that famous Olympics.

If only that were the case but what follows is a trek into Aggie’s past; a somewhat convoluted trip at that. She herself doesn’t remember much but visiting the landmarks of her younger life start the memories flowing – for good and bad. Aggie came of age in a time that did not think women could do much more than get married and have children yet she had a talent that took her out of this mold.

The book was somewhat hither and yon as the story is told as Aggie remembers things – a useful conceit if done well but here Ms. Snyder lets it get away from her and sometimes chapters that end in ways that are supposed to be suspenseful are just obvious entries to the subsequent chapters. Aggie’s character is the most developed followed perhaps by her training partner but many others are lacking and in some cases left me not caring. It’s almost as if this was two books in one – one about the challenges women faced in breaking through yet another barrier and the excitement of the Olympics and the other about a family full of secrets. I wanted the first and I expected the first but the second disappointed a bit.

You can purchase Girl Runner on Amazon.com