Every so often a synopsis makes me think, oh this is going to be good. I was proved right with Girl Waits with Gun by Amy Stewart. I thank Historical Fiction Virtual Book Tours for sending me a copy at no charge for my honest review. 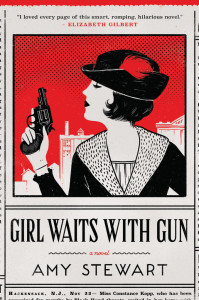 About Girl Waits with Gun:

From the New York Times best-selling author of The Drunken Botanist comes an enthralling debut novel based on the forgotten true story of one of the nation’s first female deputy sheriffs.

Constance Kopp doesn’t quite fit the mold. She towers over most men, has no interest in marriage or domestic affairs, and has been isolated from the world since a family secret sent her and her sisters into hiding fifteen years ago. One day a belligerent and powerful silk factory owner runs down their buggy, and a dispute over damages turns into a war of bricks, bullets, and threats as he unleashes his gang on their family farm. When the sheriff enlists her help in convicting the men, Constance is forced to confront her past and defend her family — and she does it in a way that few women of 1914 would have dared.

Amy Stewart is the author of seven books. Her latest, Girl Waits With Gun, is a novel based on a true story. She has also written six nonfiction books on the perils and pleasures of the natural world, including four New York Times bestsellers: The Drunken Botanist, Wicked Bugs, Wicked Plants, and Flower Confidential. She lives in Eureka, California, with her husband Scott Brown, who is a rare book dealer. They own a bookstore called Eureka Books. The store is housed in a classic nineteenth-century Victorian building that Amy very much hopes is haunted.

Stewart has written for the New York Times, the Washington Post, and many other newspapers and magazines, and has appeared frequently on National Public Radio, CBS Sunday Morning, and–just once–on TLC’s Cake Boss. She is the recipient of a National Endowment for the Arts fellowship, the American Horticulture Society’s Book Award, and an International Association of Culinary Professionals Food Writing Award.

When I was first offered this book for review my first comment was that the title sounded like the title for a 18th century painting. Little did I know that it came from the headline of newspaper! I didn’t know when I accepted it that the story was based on real events. It’s historical fiction but relatively modern in the scheme of what I generally like to read in that it takes place in 1914.

This is the story of three sisters living alone in rural New Jersey. They grew up with an absent father and a mother who was, let’s say a little suspicious of anyone other than her immediate family. The girls have a brother but he is married and he lives in the city. After their mother dies the girls decide to stay on their land despite the pleas of their brother to move in with him. They are a bit set in their ways and see no reason to leave what they know.

The three girls, Constance, Norma, and Fleurette try to just live their lives but one day while in town running errands their cart is hit by a car. Constance insists on chasing the driver for the money to fix the cart not realizing that he is not the type of man to deal honestly with a debt. In fact he’s the type of man to try and kill her rather than pay damages.

What follows is an absolutely fascinating look at Northern New Jersey, the silk dying industry and corruption at the beginning of the 20ieth century. The story is drawn from newspaper articled and other extant materials of the time. Ms. Stewart fleshes out the characters and what she creates is an utterly fascinating book that I was drawn into from the very first paragraph. It’s different, I can’t say that any of the three main characters are really likable and Fleurette is downright annoying but still I couldn’t stop turning the pages. This is one of my favorite books of the year. I’m keeping it to read again when I find that elusive spare time.