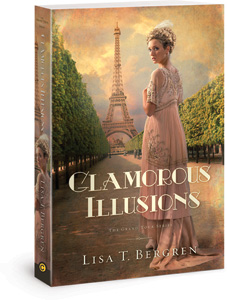 
The first book in the Grand Tour series, Glamorous Illusionswill take readers on a pilgrimage through Europe-and straight into the soul.


It’s the summer of 1913 and Cora Kensington’s life on the family farm has taken a dark turn. After burying the only father she’s ever known, she lost her beau in a tragic accident. Then a stranger comes to call. In one fateful afternoon, Cora discovers that her birth father is a copper king-a man who invites her to tour Europe with her new family. As she travels from England to France, Cora faces the hardships as well as the privileges of assuming the family name. And though now she knows more of her true identity, she soon discovers the journey is only beginning.


Lisa Tawn Bergren is the best-selling, award-winning author of over 30 books, with more than 1.5 million copies sold. She just finished writing a Colorado historical trilogy (the first book, Breathe, Sing and Claim), and has begun a teen series called River of Time (Waterfall, book 1, comes out in February 2011).

Lisa’s time is split between managing home base, writing (including a fair amount of travel writing), consulting and freelance editing (with a little speaking here and there). She’s married to Tim, a liturgical sculptor, graphic designer and musician. They have three kids-Olivia (15), Emma (12) and Jack (7).


All five of the Bergrens make their home in Colorado Springs, Colorado.
For more information on Lisa and to view other books written, please visit her website: http://lisatawnbergren.com


Cora Diehl comes home from college to her family farm for the summer to help her parents. Things are not going well as there has been drought and the crops have not come in. Her parents scraped and borrowed to be able to send her to school and now disaster upon disaster  piles up. Then her father has a stroke. Just as he is recovering from that – a heart attack! No money for medical care and no way to borrow money to get the winter wheat in.  Cora does what she has to; she goes to the bank for a loan against a mysterious necklace that had arrived on her 16th birthday. Another in a long line of expensive gifts from an unknown giver.


Just as she thinks all is lost a stranger arrives – copper king, senator and HER FATHER?! – Wallace Kensington. He is there to tell her of her parentage and offer (?) her and her mother a way out of their predicament. Cora is completely shocked and wants nothing to do with him but her mother begs her to allow him to help. It will give her adoptive father the best chance at recovery.


So off Cora goes with Mr. Kensington to meet her half siblings and head off for a Grand Tour to Europe. The half siblings and their close friends the Morgans are less than thrilled to have Cora thrust upon them for they fear her illegitimacy will impact their ability to socialize with the “right” people but Mr. Kensington sends along enough money to cover any problems as he feels that ANYONE can be bought.


The book was charming if rather unbelievable. The writing kept me reading and turning the pages and truly enjoying the story and it wasn’t until after I was done and started thinking about it that I realized that it was all total poppycock. But it was enjoyable poppycock. The characters were diverse and for the most part fleshed out. The European nobility were cardboard and the descriptions of the glorious places visited on the Tour were surprisingly flat but Cora carries the story and I would certainly pick up the successive books in the series to see what happens to her.


You can purchase Glamorous Illusions on Amazon.com


What is our “true” identity?
Join the conversation at Lisa Tawn Begren’s Glamorous Illusions Author Chat Facebook Event Page. On the evening of 6/27 we’ll gather to talk about our spiritual journey,
share our stories and a few laughs.


In the meantime, celebrate with Lisa by entering her Glamorous Illusions
Giveaway!


One “glamorous” winner will receive a “Glam Prize Pack”:

Enter today by clicking one of the icons below. But hurry, the giveaway ends
6/26/12. Winner will be announced at Lisa’s “Glamorous Illusions” Facebook Party on  6/27 {Fun begins at 5pm PDT / 8pm EDT}. Lisa will be hosting an evening of meaningful chat, fun trivia,laughter, and encouragement – bring your friends! She’ll also be giving away some GREAT prizes: gift certificates, books, and a Book Club Prize Pack! (Ten copies of the
book for your small group or book club and a live chat with Lisa via video or phone.)


So grab a few of your friends and your copy of Glamorous Illusions and join Lisa
on the evening of June 27th for an evening of fun.

Don’t miss a moment of the fun. RSVP
TODAY and tell your friends via FACEBOOK or TWITTER and increase your chances of winning. Hope to
see you on the 27th!

Disclosure:  I received a copy of Glamorous Illusions from Litfuse Publicity Group gratis. Any opinions expressed are my honest opinions and were not impacted by my receipt of the free book. I received no monetary compensation for this post.

The Queen’s Vow by C.W. Gornter – Book Review
And Laughter Fell from the Sky by Jyotsna Sreenivasan – Blog Tour and Book Review