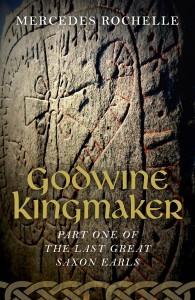 Harold Godwineson, the Last Anglo-Saxon King, owed everything to his father. Who was this Godwine, first Earl of Wessex and known as the Kingmaker? Was he an unscrupulous schemer, using King and Witan to gain power? Or was he the greatest of all Saxon Earls, protector of the English against the hated Normans? The answer depends on who you ask. He was befriended by the Danes, raised up by Canute the Great, given an Earldom and a wife from the highest Danish ranks. He sired nine children, among them four Earls, a Queen and a future King. Along with his power came a struggle to keep his enemies at bay, and Godwine’s best efforts were brought down by the misdeeds of his eldest son Swegn. Although he became father-in-law to a reluctant Edward the Confessor, his fortunes dwindled as the Normans gained prominence at court. Driven into exile, Godwine regathered his forces and came back even stronger, only to discover that his second son Harold was destined to surpass him in renown and glory.

Born in St. Louis MO with a degree from University of Missouri, Mercedes Rochelle learned about living history as a re-enactor and has been enamored with historical fiction ever since. She lives in Sergeantsville, NJ with her husband in a log home they built themselves.

I do love early English history. Many of the books I’ve read from that time period focus more on the kings and many have told the tale of Harold, Godwine’s son and the last Anglo Saxon king of England but this is the first book I’ve read that has told the story of Godwine. And told that story for the sake of Godwine not as a back drop to Harold’s tale.

It starts when Godwine is just a young boy and finds a warrior lost in his woods. Even at such a young age he figures out how to take the best advantage of a situation which shows off the sharp wit and intelligence that would carry him through his life as he befriends and becomes important to the Danish King Canute and ultimately becomes the first Earl of Wessex. He walks a fine line throughout his life making decisions that sometimes seem questionable.

I dove right in to Godwine’s tale – in fact I read this book in a day. Ms. Rochelle does an excellent job of bringing the reader into Godwine’s world whether he is in that forest with a lamb or on a ship at sea. A great man has been create and brought to life from the scraps left to history. I will eagerly await the next installment in this series

You can read an excerpt of Godwine Kingmaker