Grace in the Wings: A Grace Michelle Mystery by Kari Bovee – Book Review

Historical fiction that includes Flo Ziegfeld and a few appearances by Fanny Brice? I’m there! I thank the publisher for sending me a copy of Grace in the Wings by Kari Bovee at no charge for my honest review. 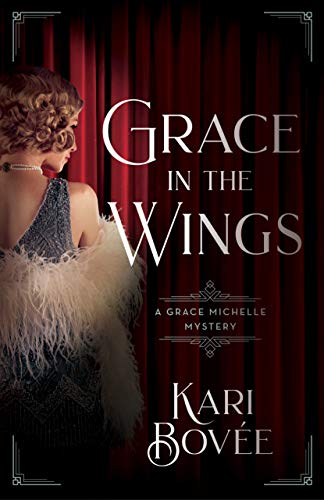 About Grace in the Wings:

New York City, 1920. Grace Michelle has everything she wants: a home, a family, and a future career as a costume designer for famed showman Florenz Ziegfeld, Jr.’s Ziegfeld Follies. Pretty good for a girl who once lived on the streets of New York City. But when her sister, Sophia, the star of the show, is murdered, Grace’s safe and protected life is shattered.

Battle-scarred by the war and emotionally scarred by his past, Chet Riker has made it a practice to keep his distance from others; love, after all, leads only to pain. But Chet has a problem—a big one: he’s become indebted to mob-boss Joe Marciano in an attempt to save his estranged mother’s life, and Marciano wants him to pay up or else. Desperate to get the money, he contacts former client Florenz Ziegfeld for work.

Soon, Chet finds himself playing bodyguard for introverted Grace, who has reluctantly agreed to be Ziegfeld’s new leading lady—on the condition that Ziegfeld promises to find Sophia’s killer. Upon meeting Grace, Chet quickly finds his hardened theory that love equals pain tested. Grace, meanwhile, is swept up in a life she never wanted as the Follies’ star, and as the pawn in a series of publicity stunts during a transcontinental train trip to California that puts her life at risk. Who would want her and Sophia dead? Together, she and Chet must confront publicity-hungry Florenz Ziegfeld, power-driven Joe Marciano, and their own pasts to find Sophia’s killer—and let themselves love once again.

Born in northern New Mexico, Kari developed a love of reading, writing, and history early in life. Her most treasured Christmas gift as a young child was a toy typewriter. After graduating with a B.A. in English Literature with an emphasis in Creative Writing, Kari found work as a technical writer at a Fortune 500 tech company. But, her love of story-telling never waned. While staying at home with two young children, Kari wrote her first novel and hasn’t stopped. She and her husband live happily in rural Corrales, New Mexico with their horses, dogs, and cats.

Grace and Sophia are orphan sisters who were taken in by Flo Ziegfeld when he found them living on the street. He gave them a place to live and nurtured Sophia’s talent for the theatre. Grace was also given song and dance lessons but her real love was her work on the costumes. Sophia has been starring in the latest Ziegfeld show but she has decided to leave to marry her boyfriend. She and Grace have a falling out over the marriage and Sophia leaves for California. Not soon after she is found dead and initial reports are suicide. But Grace doesn’t believe Sophia would kill herself.

In the midst of her concern for her sister Flo Ziegfeld is having problems with his theatre and needs to replace Sophia and he decided Grace is the one to do it even if Grace does not want to be a star. He sends her on a cross country trip to promote his new show and he tells her, for his man Chet to investigate her sister’s death. Little does she know that she is only a pawn in a complicated deal between Flo and a mobster.

Will Grace figure out how her sister died and will she be able to do what she wants rather than what the men in her life want?

I was drawn to this story for the time period, the theatre aspect and of course, Flo Ziegfeld. The appearances of Fanny Brice were a fun bonus. It’s a somewhat traditional mystery tale that is well paced with enough red herrings to keep the story interesting. The hero and heroine are likable and a couple that you want to root for. The bad guy is creepily bad and there are enough people with questionable morals to keep you wondering. All in all a good start to a series.