Guest Post and #Giveaway: From Roseanne Lortz Author of Road From the West 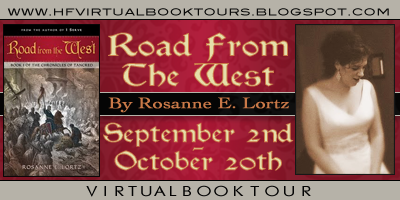 Today I would like to welcome Rosanne Lortz, the author of Road From the West with a very special guest post. Be sure to enter the giveaway after to post to win a copy of Road From the West. It’s a fascinating read about the First Crusade. You will find my review HERE.

The Rise of the Knights Templar
Throughout the centuries the Knights Templar have captured the popular imagination as a close-knit brotherhood full of symbolism, mystery, and political machinations.  Most of this legacy is due to the dramatic demise of the order and the lurid tales – whether true or manufactured – that King Philip IV of France spread about their practices.  Even today, bestsellers like The Da Vinci Code attest that a keen interest in the nine hundred year old Templars still thrives – a fact that would no doubt have astonished the original founders of the Order.
The Poor Fellow-Soldiers of Christ and of the Temple of Solomon (more commonly known as the Knights Templar or the Order of the Temple) were established in A.D. 1118, nearly two decades after the conclusion of the First Crusade.  This military endeavor had returned the city of Jerusalem to Christian hands after over four hundred years of Muslim occupation.  But capturing Jerusalem was only the first step.  Now the Crusaders had to garrison her and defend her against all comers.
Many of the First Crusaders elected to return home to Europe once they achieved their objective, and the new king of Jerusalem was left with only a skeleton crew of soldiers to maintain his foothold in the East.  The creation of the Templars came in response to this need for manpower.  William of Tyre, a Crusade historian of the twelfth century, describes their founding:
[C]ertain noble men of knightly rank, religious men, devoted to God and fearing him, bound themselves to Christ’s service in the hands of the Lord Patriarch.  They promised to live in perpetuity as regular canons, without possessions, under vows of chastity and obedience…. Since they had no church nor any fixed abode, the king, gave them for a time a dwelling place in the south wing of the palace, near the Lord’s Temple…. Their primary duty, one which was enjoined upon them by the Lord Patriarch and the other bishops for the remission of sins, was that of protecting the roads and routs against the attacks of robbers and brigands.  This they did especially in order to safeguard pilgrims.
It is almost amusing how innocuous the founding of the original Order was, in comparison to the infamous legends that would later gild the Templars’ reputations. As you can see in William of Tyre’s account, the knights took the same vow that would be required of a monk:  poverty, chastity, and obedience.  In addition, they undertook to protect the routes of travel as directed by the bishop of Jerusalem (the “Lord Patriarch”). The name of the Templar Order, as you may have already surmised, came from the knights headquarters on the Temple Mount where the medievals supposed that the ruins of Solomon’s Temple were situated. Initially, there were only nine knights in the brotherhood, and the badge of the order showed two knights riding on a single horse – an apt emblem of the Templars’ commitment to poverty.
As with many institutions, however, the ideas of the founders modified over time.  Ten years later, when the Order of the Temple became officially endorsed by the Roman Catholic Church, the knights became the recipients of a golden stream of charity.  Although the members of the Order still took a vow of personal poverty, the Templars as a collective became the owners of vast wealth.  Another decade passed, and the Pope issued a bull exempting the Templars from any authority other than his own.  Word spread quickly that Templar Knights were no longer required to obey local laws or pay taxes, and the membership of the Order grew exponentially.  The defense of the Holy Land began to depend very heavily on the knights of the Templar Order.
As the years went by, the Order grew in power and prestige.  The Templars acquired vast tracts of land all across Europe and founded preceptories (local chapterhouses) in nearly every country.  The “Poor Fellow-Soldiers of Christ” developed a revolutionary system of banking – travelers could deposit their money or valuables at one preceptory and receive a letter of credit, make the lengthy journey to the Holy Land, and withdraw their funds safe and sound at a preceptory on the other end.  The Templars’ wealth increased to such magnitude that when Louis IX of France needed ransoming from the Muslims in 1250, the Templars were the only ones able to provide him with the requisite loan (nearly twice the annual tax revenue of France).
So far runs the tale of the rise of the Knights Templar.  The story of their fall is a fascinating one as well, full of envy, greed, darkness and deviltry – but too long to chronicle here.  Amidst the clouds of rumor that consumed them in the end, it is well to remember the Templars as they were at first:  “noble men of knightly rank, religious men, devoted to God and fearing him”, committed to protecting wayfarers against the attacks of robbers and brigands – nine poor, chaste, obedient men who would become, in time, the bulwark of Chistendom in the East.
I would like to thank Ms. Lortz for that fascinating look into the beginning of the Knights Templar.
You can read an excerpt
You can see the entire Tour Schedule
You can find Roseanne Lortz on Facebook
You can read Roseanne Lortz’s Blog
You can find Road from the West on Amazon.com
I have one copy of Road From the West to give away.
How do you win?
It’s easy! Just click on the “read more” and jump on the Rafflecopter. If you are here by direct link the ‘copter is waiting!

Disclosure:  I received a copy of Road From the West fromHistorical Fiction Virtual Book Tours. Any opinions expressed are my honest opinions and were not impacted by my receipt of the free book. I received no monetary compensation for this post
Share
Tweet
Yum
Share
Pin
Email
book giveaway

Book #Review and #Giveaway: The Night Circus by Erin Morgenstern
From the Garden: Watermelon, Part II and Cantaloupe