As you all know I have been branching out in to more genres of reading lately. The Gypsy Moth Summer was certainly a stretch for me and I thank TLC Book Tours for sending me a copy at no charge for my honest review. Read on to see what I thought. 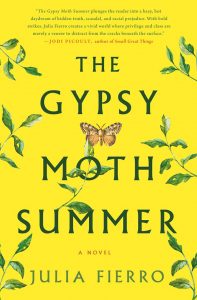 About The Gypsy Moth Summer:

“Fierro doesn’t just observe, she knows. Like all great novelists, she gives us the world.” – Amy Bloom, bestselling author of Away and Lucky Us

It is the summer of 1992 and a gypsy moth invasion blankets Avalon Island. Ravenous caterpillars disrupt early summer serenity on Avalon, an islet off the coast of Long Island–dropping onto novels left open on picnic blankets, crawling across the T-shirts of children playing games of tag and capture the flag in the island’s leafy woods. The caterpillars become a relentless topic of island conversation and the inescapable soundtrack of the season.

It is also the summer Leslie Day Marshall–only daughter of Avalon’s most prominent family–returns with her husband, a botanist, and their children to live in “The Castle,” the island’s grandest estate. Leslie’s husband Jules is African-American, and their children bi-racial, and islanders from both sides of the tracks form fast and dangerous opinions about the new arrivals.

Maddie Pencott LaRosa straddles those tracks: a teen queen with roots in the tony precincts of East Avalon and the crowded working class corner of West Avalon, home to Grudder Aviation factory, the island’s bread-and-butter and birthplace of generations of bombers and war machines. Maddie falls in love with Brooks, Leslie’s and Jules’ son, and that love feels as urgent to Maddie as the questions about the new and deadly cancers showing up across the island. Could Grudder Aviation, the pride of the island–and its patriarch, the Colonel–be to blame?

As the gypsy moths burst from cocoons in flocks that seem to eclipse the sun, Maddie’s and Brooks’ passion for each other grows and she begins planning a life for them off Avalon Island.

Vivid with young lovers, gangs of anxious outsiders; a plotting aged matriarch and her husband, a demented military patriarch; and a troubled young boy, each seeking his or her own refuge, escape and revenge, The Gypsy Moth Summer is about love, gaps in understanding, and the struggle to connect: within families; among friends; between neighbors and entire generations.

JULIA FIERRO is the founder of The Sackett Street Writers’ Workshop, a creative home to more than 4,000 writers in New York City, Los Angeles and online. Her first novel CUTTING TEETH, was praised by The Boston Globe (“at once modern and timeless”) and The New Yorker (“a comically energetic début”).  A graduate of the Iowa Writer’s Workshop, Julia lives in Brooklyn and Los Angeles.

I was intrigued by this book even thought it’s out of my normal reading box because I remember the big gypsy moth invasion. They were everywhere. The big clouds of they wove in the trees. It was a royal mess. An odd reason for choosing to read a book but one never knows what’s going to make a story resonate.

This is more than anything else a story of family – well, families. They all live on a small island off of Long Island dominated by an aviation company. The island is divided by class – on one side lives the rich, owners and executives of Grudder Aviation and on the other live the people who work there and support the company.  About the only place they join is in the marriage of one of the scions of Grudder and a mechanic from the other side of the island – the Pencott LaRosas and at the annual carnival.

This year’s carnival proves especially explosive when a former resident of the island returns after the death of her mother to take up residence in what is known as “the Castle.” She brings her husband and two bi-racial children – her husband being the reason she was estranged from her family. Everyone wants to know why she is back. Her husband just wants to stay in the background and keep his children safe. But it’s hard to be invisible when you are the only black man at the party who is a guest and not the help.

The executives of Grudder Aviation are feeling the pinch of too many years without war and they are not liking the looks of this Clinton guy running for President. There have also been a large number of health issues that seem to be all pointing to toxic waste coming from the Grudder site. As the executives circle the wagons and everyone’s stories slowly unfold with the life cycle of the gypsy moth playing in the background everything comes to a head one fateful night in the Castle.

This is a very complex book full of a rich mix of characters dealing with a myriad of life’s issues. There are teenagers transitioning from adolescence to adulthood, there are racial issues, class issues, health issues and environmental issues. There is a lot covered in this novel and it is covered well for the most part. I was very invested in the book until the last quarter. Then it all went off the rails for me. I can’t tell you why because it would spoil plot points but it’s like characters drank the toxic water and forgot who they were. I kept turning the pages of the last chapters and expecting dream sequences like on the old TV show Dallas. But no, no dreams. Maybe the noise of all those gypsy moths was just too much.

One lucky US reader will win a copy of The Gypsy Moth Summer. Just enter as many ways as you would like on the Gleam widget below. Full rules are on the widget. Good luck everyone.