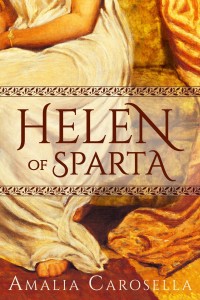 Long before she ran away with Paris to Troy, Helen of Sparta was haunted by nightmares of a burning city under siege. These dreams foretold impending war—a war that only Helen has the power to avert. To do so, she must defy her family and betray her betrothed by fleeing the palace in the dead of night. In need of protection, she finds shelter and comfort in the arms of Theseus, son of Poseidon. With Theseus at her side, she believes she can escape her destiny. But at every turn, new dangers—violence, betrayal, extortion, threat of war—thwart Helen’s plans and bar her path. Still, she refuses to bend to the will of the gods.

A new take on an ancient myth, Helen of Sparta is the story of one woman determined to decide her own fate.

Amalia Carosella graduated from the University of North Dakota with a bachelors degree in Classical Studies and English. An avid reader and former bookseller, she writes about old heroes and older gods. She lives with her husband in upstate New York and dreams of the day she will own goats (and maybe even a horse, too). For more information, visit her blog at www.amaliacarosella.com. She also writes fantasy and paranormal romance as Amalia Dillin.

I love stories that take place in Ancient Times. I have a passing knowledge of the Greek myths; I know the basics of most of the more well known tales but must admit that Theseus was unknown to me. Whether I had just lost my knowledge of him or had plain just never heard of him I can’t tell you but I will admit to some googling in the course of reading Helen of Sparta (BTW – is it me or is the Helen of Troy page in Wikipedia way misogynistic? I know Helen was no brain surgeon but I don’t think she was that bad. The poor girl couldn’t help being born beautiful.)

As to this book – gah! I had the world’s worst time putting it down! It doesn’t deal with the usual story of Helen but rather it weaves a possibility of  a what might have been of the time before Helen starts her march towards launching those 1,000 ships. In this story Helen is a young woman fighting her destiny and hoping to find a way to stop the war she sees coming in her nightmares. If she can only change the course of her life perhaps she can keep all of those men from dying and the horrors she dreams of visiting her.

Helen is the daughter of Zeus but denies the gods and this is probably her biggest flaw – living in a time when the gods and their fickle natures rule the world of the mortals it is foolish of her to ignore their existence and power. But this she does despite putting her faith in Theseus, the son of Poseidon, and King of Athens. He is loyal to his father and the patroness of his city, Athena.

I was drawn in from the very first pages by the characterization of Helen and all of the others that inhabit her world. Each one had dimension and intrigued me. The writing was fast paced and I kept turning the pages since I really didn’t know this aspect of Helen’s story. There is a fair amount of artistic license taken as is admitted in the author’s note but I like this Helen. My only issue was with the ending. It just ended with little or no fanfare. Unless this was the author’s intent since the rest of Helen’s story is that which is so well known. Or is a sequel planned? Since I am a touch confused perhaps the notation of another book or an epilogue was in order. Despite this, I thoroughly enjoyed this new take on a very old tale.

You can follow the Helen of Sparta Tour Schedule

This is a tour wide giveaway so check the widget for the rules.