I was sent a copy of Heroes of the Bob Marshall Wilderness by John Fraley at no charge. 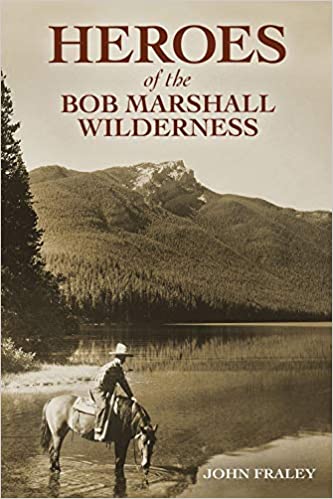 About Heroes of the Bob Marshall Wilderness:

Follow author John Fraley as he traces the lives and times of past and present heroes of the Bob Marshall Wilderness, from old-timers like Joe Murphy, to Smoke Elser, and on to the present. Over the past century, these heroes have ridden, packed, and hiked from one end of the Bob to the other, and they’ve helped make the wilderness what it is today.
You’ll ride along on horse and mule treks and wrecks, and discover the sport of trout wrangling.

Sit back and read about a dog rescue, smokejumper adventures, kids raised in the wilderness, and the first study of grizzlies in the Bob.

Witness a tense moose-lassoing rodeo, and meet a backcountry rooster named Bob Marshall, the first live chicken to attempt a traverse of the Bob.

The heroes in this book have ridden and hiked hundreds of thousands of miles through the Bob Marshall Wilderness Complex.

Now, come along with them and celebrate their contributions, their challenges, and their fun times.

John Fraley came to Montana as a teenager to attend the University of Montana, where he received a B.S. in Wildlife Biology. He continued his education at Montana State University and received an M.S. in Fish and Wildlife Management.

John worked for the state wildlife agency for nearly forty years, mostly in the forks of the Flathead; he retired in 2017. For thirty-two years he has served as an adjunct instructor at Flathead Valley Community College where he teaches wildlife conservation and other courses.<BT><p< John has written three previous books on Flathead pioneers within Glacier National Park and the Bob Marshall Wilderness: A Woman s Way West, in 1998, Wild River Pioneers in 2008 and Ranger, Trappers and Trailblazers in 2018. Over the years, he has written numerous magazine articles on the history of the Flathead.

John’s wife, Dana, and children, Kevin, Heather, and Troy, continue to share with him a love of wandering around the backcountry of the three forks of the Flathead.

When presented with the opportunity to learn more about my adopted state I was thrilled. Montana is a state rich in history and I am the first to admit to knowing very little of it. It’s also a very diverse state which encompasses different ecosystems and runs from time zone to time zone. Heroes of the Bob Marshall Wilderness focuses on one are of this great state but it’s an environmentally important and scenically beautiful one.

I will note that I didn’t read this book like a novel, from cover to cover. I would pick it up between books and read a story or two here and there. As it’s not a novel or a historical narrative it was a pleasant way to fill some spare time here and there. The book shares the stories of the people who fought for and love this magnificent wilderness area.

It’s so very hard to describe how beautiful the Bob truly is and I have only danced around one side of it. Here you can read about the people and forces that led to its protection as a roadless wildnerness. To learn their stories is fascinating.

This is a book for anyone who loves Montana, who loves the wilderness and wants to see some of this country stay wild.