I received a free copy of Hidden Figures for my honest review from TLC Book Tours. 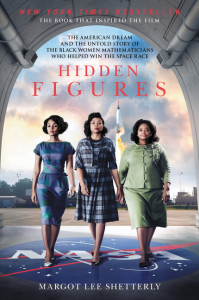 Before John Glenn orbited the earth, or Neil Armstrong walked on the moon, a group of dedicated female mathematicians known as “human computers” used pencils, slide rules and adding machines to calculate the numbers that would launch rockets, and astronauts, into space.

Among these problem-solvers were a group of exceptionally talented African American women, some of the brightest minds of their generation. Originally relegated to teaching math in the South’s segregated public schools, they were called into service during the labor shortages of World War II, when America’s aeronautics industry was in dire need of anyone who had the right stuff. Suddenly, these overlooked math whizzes had a shot at jobs worthy of their skills, and they answered Uncle Sam’s call, moving to Hampton, Virginia and the fascinating, high-energy world of the Langley Memorial Aeronautical Laboratory.

Even as Virginia’s Jim Crow laws required them to be segregated from their white counterparts, the women of Langley’s all-black “West Computing” group helped America achieve one of the things it desired most: a decisive victory over the Soviet Union in the Cold War, and complete domination of the heavens.

Starting in World War II and moving through to the Cold War, the Civil Rights Movement and the Space Race, Hidden Figures follows the interwoven accounts of Dorothy Vaughan, Mary Jackson, Katherine Johnson and Christine Darden, four African American women who participated in some of NASA’s greatest successes. It chronicles their careers over nearly three decades they faced challenges, forged alliances and used their intellect to change their own lives, and their country’s future.

Margot Lee Shetterly grew up in Hampton, Virginia, where she knew many of the women in Hidden Figures. She is an Alfred P. Sloan Foundation Fellow and the recipient of a Virginia Foundation for the Humanities grant for her research on women in computing. She lives in Charlottesville, Virginia.

It always amazes me when I come upon stories such as these – women basically lost to history. I had no idea about this cadre of women who worked for the nascent NASA. They were actually called computers; but in essence they were early engineers. They did this vital, valuable work and yet the credit fell on the men. How about that? The book singles out four women to profile – this is not historical fiction by the way – but it is the story of so many more women.

Even though this is non-fiction the book reads like a novel. Ms. Shatterly introduces her heroines and the reader learns about these amazing women in the context of their time. Despite living in horribly restrictive times – as women and as women of color they break so many barriers. They still deal with being all of the other issues women are still dealing with today – motherhood, discrimination, men claiming their work. But this all happened at a time when blacks were still being relegated to separate bathrooms, water fountains, etc. In fact one of the issues was finding a building for them to work in so they wouldn’t “mix” with the white workers. It does make for some uncomfortable reading at times. As it should.

I was utterly fascinated by the stories of the times, of the women, of the work they did and of how Ms. Shetterly wove it all together. I didn’t know about the movie when I chose to review the book but now I admit I’m looking forward to seeing it. It will add fictional elements of course but I’m sure it will be fascination. These women deserve to be celebrated and it is long overdue.