I have read several of Mr. Maguire’s books and enjoyed their different take on the familiar so when I was offered the opportunity to read his latest I jumped at it. Hiddensee is about The Nutcracker but it’s not. If you’ve read Maguire you understand that. If you haven’t – well, try him. The book was sent to me at no charge as part of his tour with TLC Book Tours. 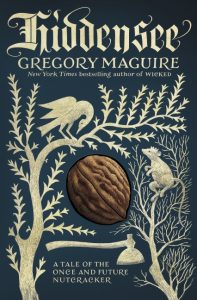 From the author of the beloved #1 New York Times bestseller Wicked, the magical story of a toymaker, a nutcracker, and a legend remade . . .

Gregory Maguire returns with an inventive novel inspired by a timeless holiday legend, intertwining the story of the famous Nutcracker with the life of the mysterious toy maker named Drosselmeier who carves him.

Hiddensee: An island of white sandy beaches, salt marshes, steep cliffs, and pine forests north of Berlin in the Baltic Sea, an island that is an enchanting bohemian retreat and home to a large artists’ colony– a wellspring of inspiration for the Romantic imagination . . .

Having brought his legions of devoted readers to Oz in Wicked and to Wonderland in After Alice, Maguire now takes us to the realms of the Brothers Grimm and E. T. A. Hoffmann– the enchanted Black Forest of Bavaria and the salons of Munich. Hiddensee imagines the backstory of the Nutcracker, revealing how this entrancing creature came to be carved and how he guided an ailing girl named Klara through a dreamy paradise on a Christmas Eve. At the heart of Hoffmann’s mysterious tale hovers Godfather Drosselmeier– the ominous, canny, one-eyed toy maker made immortal by Petipa and Tchaikovsky’s fairy tale ballet– who presents the once and future Nutcracker to Klara, his goddaughter.

But Hiddensee is not just a retelling of a classic story. Maguire discovers in the flowering of German Romanticism ties to Hellenic mystery-cults– a fascination with death and the afterlife– and ponders a profound question: How can a person who is abused by life, shortchanged and challenged, nevertheless access secrets that benefit the disadvantaged and powerless? Ultimately, Hiddensee offers a message of hope. If the compromised Godfather Drosselmeier can bring an enchanted Nutcracker to a young girl in distress on a dark winter evening, perhaps everyone, however lonely or marginalized, has something precious to share.

Gregory Maguire is the New York Times bestselling author of Confessions of an Ugly Stepsister; Lost; Mirror Mirror; and the Wicked Years, a series that includes Wicked, Son of a Witch, A Lion Among Men, and Out of Oz. Now a beloved classic, Wicked is the basis for a blockbuster Tony Award–winning Broadway musical. Maguire has lectured on art, literature, and culture both at home and abroad. He lives with his family near Boston, Massachusetts.

You have to go into reading a book by Gregory Maguire with an open mind. I didn’t know that when I read my first book authored by him but it’s apparent pretty quickly that you are entering a different kind of world. His books are not going to be for everyone and I’ve run into people that love them as I do and just as many that don’t get them. I find it surprising that I enjoy them as much as I do as I am such a literal thinker. To me that is a testament to Mr. Maguire’s ability to create a reality within his fantasy worlds. To somehow ground them in enough that is believable for a person to accept animals that talk or worlds beyond the type we inhabit.

Hiddensee is not the Nutcracker’s story but rather his creator’s. Like most I suspect, I had never given much thought to this aspect of the tale, but rather only to the more familiar; the young girl, the Sugar Plum Fairy and the Nutcracker. Tchaikovsky’s music is familiar to most and calls to mind the happy children skipping along and of course that famous dancing fairy.

This book, though goes to dark places. The godfather who sets the tale in motion bringing the Nutcracker to little Klara is the focus of Hiddensee and his back story is not really a happy one. It’s this tale that Maguire mines for his book. He takes his reader through a rather dark childhood through the use of the German fairytales that most of us grew up on and the author assumes his reader has at least a general knowledge of these tales. I don’t know if they are still told to children but some of the first stories I was read included Grimm’s fairy tales. Seemingly happy for children but far more threatening when read through the eyes of an adult, eh?

The godfather’s origins were not happy and this book explores that and at times it can get a little slow but overall the magic that is Mr. Maguire’s writing pulls you out of those sections and the overall reading experience is like eating a sugar plum.