My favorite genre for reading is and has always been, historical fiction. I am sure that to anyone who visits on a regular basis this is no surprise. Oftentimes when I read a book with a real person or history at it’s core I find myself looking for other books on the time period or person. After reading one book on Joseph Smith I spent a whole year reading about the history of the Mormons and the founders of that church. Then there was my foray into the Civil War. My mother in Law sent me Killer Angels by Michael Shaara.  That sent me down a two year reading rabbit hole. This was, of course, before I started reviewing books. Now I don’t go as deep into a subject but I do purchase books to read later.  Where am I going with this? I’d like to share some of my historical fiction picks from this year and a couple of old favorites. 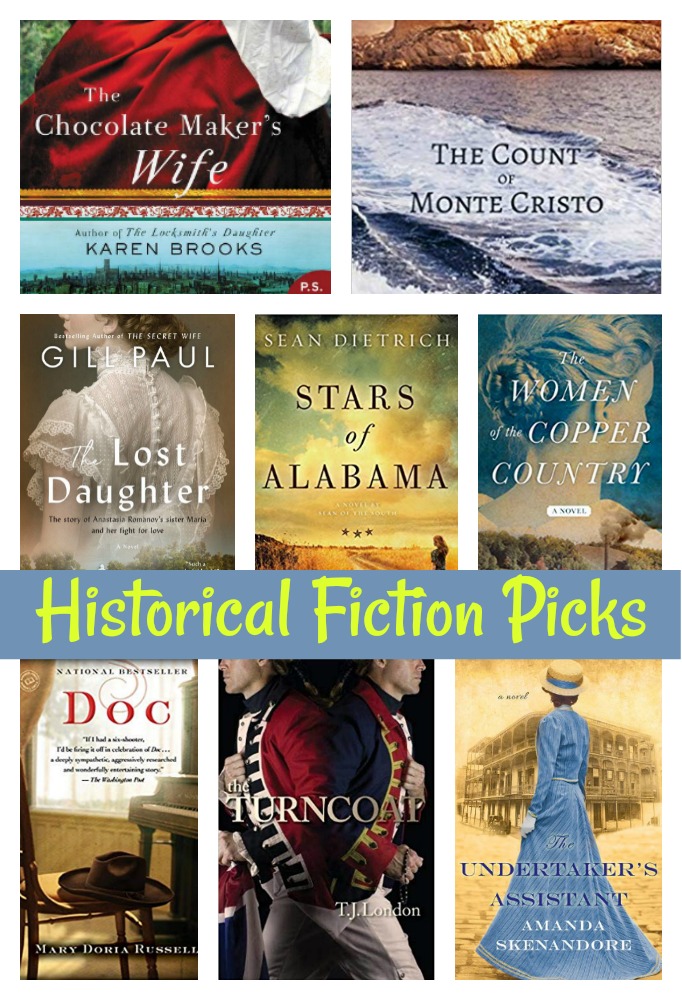 I am an eclectic reader but I do read more historical fiction than anything else. These are the novels in that genre that I have given 4.5 or 5 star reviews so far this year

The Gown by Jennifer Robson (read my review) –

The Widows by Jess Montgomery – (read my review)

The Eulogist by Terry Gamble – (read my review)

The Glovemaker by Anne Weisgarber (read my review)

The Huntress by Kate Quinn (read my review)

Nothing is Forgotten by Peter Golden (read my review)

Midnight at the Tuscany Hotel by James Markert (read my review)

The Summer Country by Lauren Willig (read my review)

The Turncoat by T.J. London (read my review)

The Chocolate Maker’s Wife by Karen Brooks (read my review)

Stars of Alabama by Sean Dietrich (read my review)

The Lost Daughter by Gill Paul (read my review)

The Count of Monte Cristo – my favorite book of all time!

I hope you have enjoyed this round up of some of my favorite historical fiction picks of this year and more. I will have more reviews throughout the rest of the year.