My apologies to Ms. Gersen, author of Home Field and TLC Book Tours. This was supposed to run first thing this morning but due to hosting problems my blog was down for 24 hours. 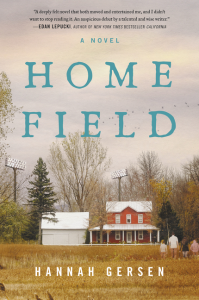 The heart of Friday Night Lights meets the emotional resonance and nostalgia of My So-Called Life in this moving debut novel about tradition, family, love, and football.

As the high school football coach in his small, rural Maryland town, Dean is a hero who reorganized the athletic program and brought the state championship to the community. When he married Nicole, the beloved town , he seemed to have it all—until his troubled wife committed suicide. Now, everything Dean thought he knew is thrown off kilter as Nicole’s death forces him to re-evaluate all of his relationships, including those with his team and his three children.

Dean’s eleven-year old son, Robbie, is withdrawing at home and running away from school. Bry, who is only eight, is struggling to understand his mother’s untimely death and his place in the family. Eighteen-year-old Stephanie, a freshman at Swarthmore, is torn between her new identity as a rebellious and sophisticated college student, her responsibility towards her brothers, and reeling from missing her mother. As Dean struggles to continue to lead his team to victory in light of his overwhelming personal loss, he must fix his fractured family—and himself. When a new family emergency arises, Dean discovers that he’ll never view the world in the same way again.

Transporting readers to the heart of small town America, Home Field is an unforgettable, poignant story about the pull of the past and the power of forgiveness.

Hannah Gersen was born in Maine and grew up in western Maryland. She is a staff writer for The Millions, and her writing has been published in the New York Times, Granta, and The Southern Review, among others. Home Field is her first novel. She lives in Brooklyn with her family.