I received a free copy of House of Earth from TLC Book Tours for my honest review. I received no monetary compensation for this post. 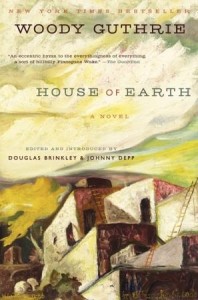 • Paperback: 288 pages
• Publisher: Harper Perennial (October 22, 2013)
Finished in 1947, House of Earth is Woody Guthrie’s only fully realized novel—a powerful portrait of Dust Bowl America, filled with the homespun lyricism and authenticity that have made his songs a part of our national consciousness.
Tike and Ella May Hamlin struggle to plant roots in the arid land of the Texas Panhandle. The husband and wife live in a precarious wooden farm shack, but Tike yearns for a sturdy house that will protect them from the treacherous elements. Thanks to a five-cent government pamphlet, Tike has the know-how to build a simple adobe dwelling, a structure made from the land itself—fireproof, windproof, Dust Bowl–proof. A house of earth.
Though they are one with the farm and with each other, the land on which Tike and Ella May live and work is not theirs. Due to larger forces beyond their control—including ranching conglomerates and banks—their adobe house remains painfully out of reach.

I must admit to not knowing much about Woody Guthrie beyond the folk songs he sang and of course, “This Land is Your Land.” I suspect though that the synopsis of this book would have intrigued me no matter the author. Sadly, I think the only reason this book was published is BECAUSE it was written by Woody Guthrie.

It is ostensibly a story about a man wanting a better life for his family. He thinks that building an adobe house is the answer because it will stand up the the ravages of the weather. It ends up being a four section, slow moving chronicle that mentions adobe houses at the most absurd times. The first chapter has a somewhat graphic and at the same time exceptionally boring sex scene and in the middle of it adobe houses are discussed. They are discussed in the middle of labor. They are discussed ad nasueum. I get it – he wants an adobe house. Enough already.

You can see the House of Earth Tour Schedule

You can purchase House of Earth on Amazon.com

Disclosure:  I received a free copy of House of Earth from TLC Book Tours for my honest review. I received no monetary compensation for this post.