I Am Venus by Barbara Mujica – Blog Tour, Book Review and Giveaway

I received a free copy of I Am Venus from TLC Book Tours for my honest review. I received no other compensation for this post. 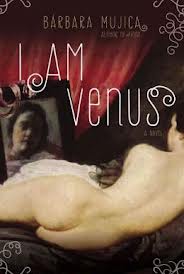 
Hardcover: 304 pages
Publisher: Overlook Hardcover (June 13, 2013)
Bárbara Mujica, author of the acclaimed historical novels Frida and Sister Teresa, turns her eye to 17th-century Spain and the court of King Phillip IV, in her new book, I Am Venus.
I Am Venus chronicles the relationship between the great Baroque Spanish painter Diego Velázquez and the woman who became his Venus. Author Bárbara Mujica vividly reimagines the great artist’s rise to prominence, set against the backdrop of political turmoil and romantic scandal. Narrated by the mysterious model who posed for Velázquez’s only female nude, “The Rokeby of Venus,” I Am Venus is a seductive historical novel of the love between an artist and his muse.
The year is 1619, and Diego Velazquez is a rising star at an art academy in Seville run by his father-in-law. But even as his young wife builds him a family, the painter finds himself yearning for a larger canvas, and soon his ambition lands him at the court of King Philip IV, where his star quickly rises, even as Spain finds itself plunged into military defeat and domestic chaos.
But as he gains nobility and privilege, Velázquez encounters the sinful decadence that defines the regime. As he finds himself torn between loyalty to family and the easy seductions of power, Velázquez decides to take on his riskiest painting yet, which could, in a stroke, land him in the claws of the Inquisition.
I Am Venus is a sweeping story of scandal and passion, and a vivid recreation of a corrupt kingdom on the brink of collapse. Reminiscent of Girl with a Pearl Earring, it is a thrilling novel that brings to life the public and private worlds of Spain’s greatest painter.


Barbara Mujica is a novelist, short-story writer, essayist and professor at Georgetown University.  Her latest novel,I Am Venus (Overlook Press), explores the identity of the model for the famous Rokeby Venus, the only extant female nude of seventeenth-century Spanish painter Diego de Velázquez. Her previous books include the critically acclaimed novels Frida, based on the relationship between Frida Kahlo and Diego Rivera, and Sister Teresa,about the life of Saint Teresa de Avila, both published by Overlook. A play based on the latter is currently being developed by The Actors Studio in Los Angeles.
Mujica has won numerous prizes for her stories, which have appeared in magazines and anthologies. Her essays have appeared in The New York Times, The Washington Post, The Miami Herald, The Dallas Morning Star, and hundreds of other publications.
A Professor of Spanish at Georgetown University, Dr. Mujica writes extensively on Spanish literature. She has twice been named one of Georgetown’s most influential professors by the Academic Council.
Since her son, a U.S. Marine, returned from Iraq in 2008, Mujica has devoted much of her energy to serving transitioning veterans. At Georgetown she is faculty adviser of the Georgetown University Student Veterans Association (GUSVA) as well as Associate Facilitator of the Veterans Support Team, a coalition of faculty, administrators, and students. Recently she has begun writing about issues pertaining to student veterans. For more information please visit  www.barbaramujica.com.

I must admit that going into this book I knew a little about Velazquez but he was not one of the artists I studied heavily while in college. One could not study art history without covering him so I was cognizant of the basics of his life and art. So you add my passion for art and my love of historical fiction and I was thrilled to be reading this book.

The painting of a nude during this period in Spain was dangerous due to the Inquisition and the mores of the times but a request was made and Velazquez wanted to be seen as equal to the great masters in Rome and Florence but the identity of his model has always been unknown. Ms. Mujica uses her novel to present a tantalizing possibility as to whom she might be. The book is narrated by “Venus” and she does not reveal herself until very close to the end.

I truly enjoyed the book for both its depiction of Velazquez’s rise to prominence and for the detailed history. Art in this post Renaissance time period was so very dependent on rich patrons and the politics swirling around the church and the monarchy. Art was used then to document the feelings of the people and to represent the times as well as to paint pretty pictures of the nobility. Ms. Mujica wove both the art and the history into one cohesive, delightful novel about one of the greatest artists to come from Spain.

You can see the I Am Venus Tour Schedule

You can purchase I Am Venus on Amazon.com

One lucky US reader will win a copy of I Am Venus. How do you win? It’s easy – just hop on the Rafflectoper. Good luck everyone.

Disclosure:  I received a free copy of  I Am Venus from TLC Book Tours for my honest review. I received no other compensation for this post.