I Invited Her In by Adele Parks – Blog Tour and Excerpt

I am very excited to welcome Adele Parks today with a very special excerpt from her new book, I Invited Her In. It’s now on tour with TLC Book Tours.  Please follow the tour for more excerpts, I Invited Her In will be released on February 5, 2019 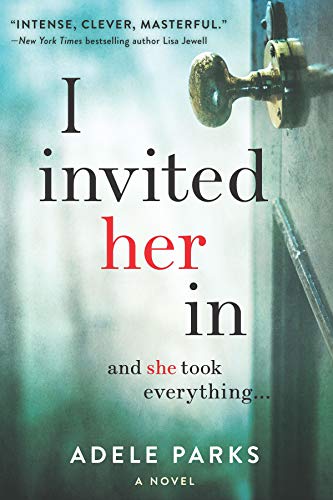 “OK, that’s the bullshit out of the way,” she said with a jaded sigh. She didn’t even bother to
introduce herself to the geology students. I glanced at them apologetically as she scoured the bar. “Who do you fancy?” she demanded.
“Him,” I replied with a grin, pointing to a hot, hip-looking guy.
“Come on then, let’s go and talk to him.”
“Just like that?” I know my face showed my astonishment.
“Yes. I promise you, he’ll be more than grateful.”
She made me laugh. All the time. Her direct, irreverent tone never faltered, never flattened, not
that evening or for the rest of the year.
We did talk to the hot, hip guy; nothing came of it, I didn’t really want or expect it to, but it was
fun. We spoke to him and maybe ten other people. It quickly became apparent that Abigail oozed cool
self-belief; she thought the world was hers for the taking, and it was a fair assessment. She was
charming and challenging, full of bonhomie and the sort of confidence that is doled out in private-school
assemblies. The best bit was, she seemed happy for me to hitch along for the ride.
It was Abi who persuaded me to join the debating society and she was the one who insisted we
went to the clubs in town, rather than just limit ourselves to the parties that bloomed in the university
common rooms.
She did all the student things like three-legged pub crawls and endless themed parties but she
also insisted we did surprising stuff, like visit the city’s museums and art galleries. Some people
whispered that she was pretentious; they resented the fact that she only enjoyed listening to music on
vinyl and was fussy about the strength of coffee beans; she refused to drink beer, sticking exclusively to
French red wine; she rarely ate. She was, by far, the most interesting person I’d ever met.
We became close. She wasn’t my only friend or even my best friend but she was my favourite. I
sometimes found it a bit exhausting to keep up with her and while she signed up for the university’s
dramatic society, I was content to sit in the audience and watch her play a shudderingly shocking Lady
Macbeth. I joined her on the coach to London and protested outside Parliament over something or
other—I forget what now—she waved her placard all day, whereas around noon, I slipped off to Oxford
Street for a quick look around Topshop.
She was the first person I told about my pregnancy. By the time we’d munched our way through
almost the entire packet of Hobnobs, Abi commented, “Bizarre to think there’s an actual baby in there.”
She was staring at my still reasonably flat stomach.
“I’m going to get so fat,” I said laughingly. Weirdly, this seemed a matter of mirth.
“Yeah, you are,” she asserted, sniggering, too.
“And no one is ever going to want to marry me.” Suddenly, I wasn’t laughing anymore. I was, to
my horror and shame, crying. The tears came in huge, uncontrollable waves. I gulped and gasped for air in pretty much the same way I had when I’d been laughing, so it took Abigail a moment to notice.
“Oh no, don’t cry,” she said, pulling me into a tight hug. She smoothed my hair and kissed the
top of my head, the way a mother might comfort a child that had fallen over. Abigail was beautiful and
sensuous—everyone wanted to touch her, all the time—but she generally chose when any contact
would happen.
“Who will want to marry me when I have a kid trailing around after me?” I hadn’t actually given
much thought to marriage up to that point in my life. I wasn’t one of those who’d forever dreamed
about a long white dress and church bells, but I’d sort of assumed it would happen at some stage in the
future. It frightened me that the undesignated point seemed considerably more distant and blurry, now that I was pregnant.
“You’ll still get the fairy tale,” Abi said with her usual cool confidence. “I mean Snow White had
seven little fellas hanging off her apron and she still netted a prince.”
This caused another round of near-hysterical laughter. I laughed so hard that snot came out of my nose. It was embarrassing at the time. A few months on, I became much more blasé about wayward
bodily fluids.
She hugged me a little tighter. “They will call you a slag, but it will be OK,” she assured me.
“Will it?”
“Yeah, it really will,” she said cheerfully.
I felt a wave of something like love for Abi at that moment. I loved her and I believed her.
That feeling has never completely gone away.

About I Invited Her In:

Imagine the worst thing a friend could ever do.

When Mel receives an unexpected email from her oldest friend Abi, it brings back memories she thought she had buried forever. Their friendship belonged in the past. To those carefree days at university.

But Abi is in trouble and needs Mel’s help, and she wants a place to stay. Just for a few days, while she sorts things out. It’s the least Mel can do.

After all, friends look out for each other, don’t they?

I Invited Her In is a blistering tale of wanting what you can’t have, jealousy and revenge from Sunday Times bestseller Adele Parks.

Adele Parks one of the most-loved and biggest-selling women’s fiction writers in the UK. She has sold over 3 million books and her work has been translated into 25 different languages.

1500+ 5 star reviews have kindly been written by her fans on Amazon.co.uk

She has published 15 novels in the past 15 years, all of which have been London Times Top Ten Bestsellers.

Adele was born in the North East of England, in 1969. She enjoyed a traditional 1970’s childhood, watching too much TV and eating convenience food because nobody minded if kids did that in those days. Since graduating from university, where she studied English Language and Literature, she worked in advertising and as a management consultant. In 2010 Adele was proud to be awarded an honorary doctorate of Letters from Teesside University.

You can preorder I Invited her in on Amazon.